By Shaun Tandon with AFP bureaus in Africa 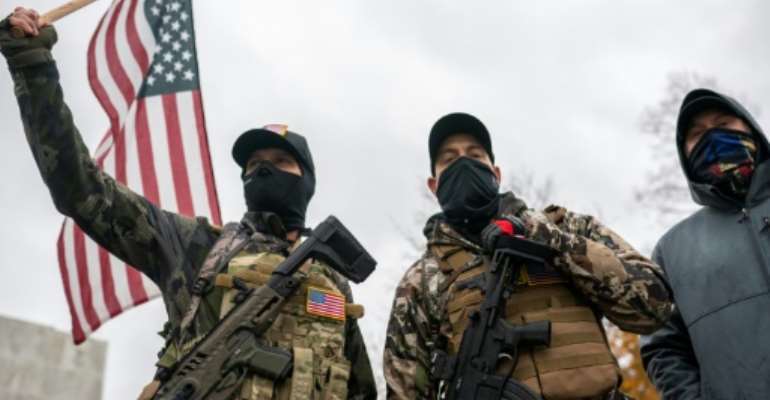 Armed protesters wave the US flag as they allege that President Donald Trump is being cheated out of an election victory in a November 14, 2020 rally in Salem, Oregon. By Nathan Howard (GETTY IMAGES NORTH AMERICA/AFP/File)

The United States has long championed democracy around the world, pushing persistently, if not always consistently, for leaders to give up power when they lose.

President Donald Trump is now establishing a new American model -- refusing to concede, making unsubstantiated claims of fraud and seeking the intervention of courts and political allies in hopes of reversing his defeat to Joe Biden.

Political figures and experts interviewed in several countries fear that Trump's blueprint will be eagerly embraced in fragile democracies, especially in Africa, letting strongmen point to the world's most powerful nation in justifying their attempts to cling to office.

"Donald Trump's refusal to concede reinforces the view of our leaders in Africa that elections should be done in a way so that they don't lose," said Mahamat Ahmat Alhabo, secretary general of the opposition Party for Freedoms and Development in Chad.

Eldred Masunungure, a political scientist at the University of Zimbabwe, said that Trump was singing "sweet music to autocratic rulers." 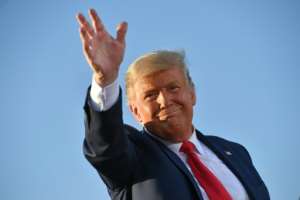 US President Donald Trump, who has refused to concede defeat, waves during an October 2020 election rally in Tucson, Arizona. By MANDEL NGAN (AFP/File)

"It's tragic. We are used to that in Africa but when it happens in the US we get shocked because it's happening in a centuries-old democracy," Masunungure said.

"It's a dirty lesson our leaders will take advantage of and cite even in the long-term future when they lose and don't want to concede defeat."

Garry Kasparov, the Russian chess legend and outspoken critic of President Vladimir Putin, said that Trump's assault on the democratic process will result in "many similar attacks in future elections, in the US and elsewhere."

Thomas Carothers, an expert on democracy promotion, noted that nations such as Russia, China and Egypt hardly needed tips from Trump on how to oppose competitive elections. 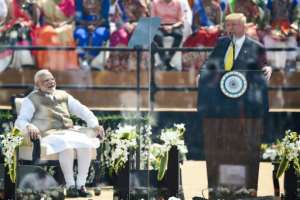 US President Donald Trump speaks during a February 2020 rally in the Indian state of Gujarat next to Prime Minister Narendra Modi, who shares some of the US leader's inclinations. By Money SHARMA (AFP/File)

But he said the effect could be more palpable in problematic democracies as leaders see how Trump can brazenly claim victory and find some support, despite Biden winning nearly six million more votes and edging Trump out 306-232 in the state-by-state Electoral College that determines US elections.

"They see the power of that approach, that even a society as educated and sophisticated in certain ways as the United States can fall victim to that kind of big lie," said Carothers, senior vice president for studies at the Carnegie Endowment for International Studies in Washington.

He drew a parallel to Trump's denunciations of "fake news," a term now cited around the world by governments that want to muzzle the media.

Carothers said nations where Trump's election challenges could provide a model include India, the world's largest democracy which has long had robust votes but where right-wing Prime Minister Narendra Modi has been taking aim at civil society.

Carothers said there could similarly be an effect in Mexico, where President Andres Manuel Lopez Obrador, a leftist populist, claimed fraud in two previous losing bids for office and remains one of the few world leaders, along with Putin, who has not congratulated Biden.

More indirectly, right-wing leaders in European nations such as Hungary and Poland could lose a source of inspiration in the White House.

Since the US vote, the State Department has congratulated winners of several elections elsewhere including Moldova, whose Russian-backed president quickly conceded.

Secretary of State Mike Pompeo, asked at a combative news conference if Trump was hindering democracy efforts, called the question "ridiculous" and said that the United States takes time in examining all elections to see if they "reflected the will of the people."

Or is the system working?

US elections have often been messy, most notoriously in 2000 when the Supreme Court let stand that George W. Bush won Florida by 537 votes, handing him the White House over Al Gore. 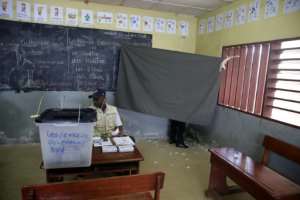 Voting in October 2018 in Gabon, where one family has been in charge for more than 50 years. By Steeve Jordan (AFP/File)

In 1960, Republicans alleged irregularities in John F. Kennedy's victory but candidate Richard Nixon did not advocate a recount, later writing that he could "think of no worse example for nations abroad" than suggestions that the White House "could be stolen by thievery at the ballot box."

Piers Pigou, an expert on Southern Africa at the International Crisis Group, said that US democracy "has not been held up as an example of best practice" but said Trump could have a ripple effect in a region where many countries do not have clear procedures for transitions of power.

But several observers said that Trump's challenge could send an opposite message -- that, despite all the power at his disposal, he is still expected to leave office on January 20.

"Democracies' strength is their institutions," said Jean Gaspard Ntoutoume Ayi, a member of the National Union opposition party in Gabon, where one family has run the presidency for a half-century.

"Unlike in African countries, American institutions will know how to impose the will of the American people on Trump's craziness."