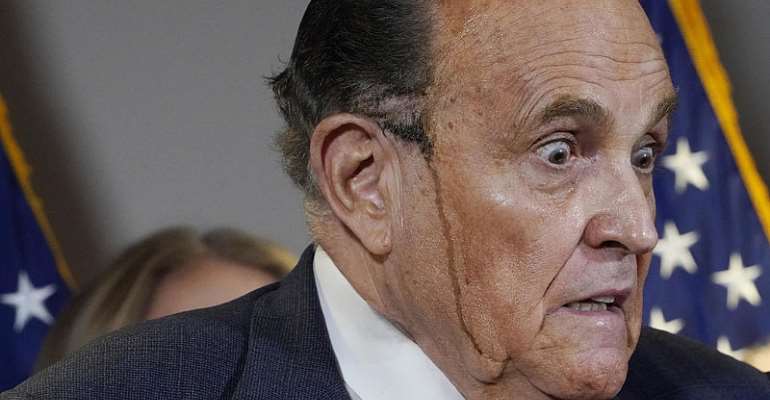 Trump lawyer and ex-New York mayor Rudi Giuliani has become the target of social media ridicule after drips of blackish substance were seen streaming down from his face during a press conference.

“And I thought Giuliani unzipping his pants on camera for Borat's daughter was going to be his peak embarrassment for 2020... Also how hot is it in that room?!?!'' tweets Megan McCain, daughter of former Arizona Senator and Republican heavyweight John McCain, referring to another embarrassing scene, where Giuliani was caught on tape by British comedian Sasha Baron Cohen.

"I can't stop looking at the dual rivulets of dye running down Rudy Giuliani's cheeks and thinking, like the Wicked Witch. Trump's defense along with his presidency is melting," tweets Rob Reiner.

"Remember in The Fifth Element when Gary Oldman bled out of his eyes?" asks Douglas Henshall. "Giuliani bleeding out his hair dye is the 2020 version, and I'm here for it in all its pathetic squalor."

The incident took place during a press conference at the Republican National Committee building in Washington D.C. Giuliani was to expose more allegations of voter fraud that, in his opinion, would help Trump winning the election after all.

But soon attention turned from his words to the sweaty stripes of black that ran down the side of his face, taking away the attention much like a fly nesting on the hair of Mike Pence did during his vice-presidential debate with Kamela Harris.

“No time to dye,” tweets @MaasneotkeC; others mock Giuliani's “dripping problem,” saying “there is something leaking,” while ABC News mocks in an “analysis” that “Like the dye running down Rudy Giuliani's face, Trump's chances of stealing victory appear to be dissolving.”

And while some tweest suggest the substance running down Giuliani's face is “shoepolish” or “black blood,” the New York Times makes a deeper study of the incidents, citing 'experts' who suggest it is not dye but mascara, used by Giuliani to blacken his sideburns"

Meanwhile, Trump's legal team has already lost repeatedly in court and failed to uncover the kind of widespread fraud that might challenge Biden's leads in several key battleground states. His lawyers and allies have still pressed forward with asking judges and certification authorities to block the results.

During this latest press conference, Giuliani and other Trump lawyers berated reporters for questioning their claims and cited a Michigan affidavit already dismissed by a judge. They also argued a debunked conspiracy theory that Venezuela could have hacked election results through machines used by local authorities.

Experts say Trump has almost no chance of reversing his loss.