Was Martin Amidu This Grossly Incompetent? 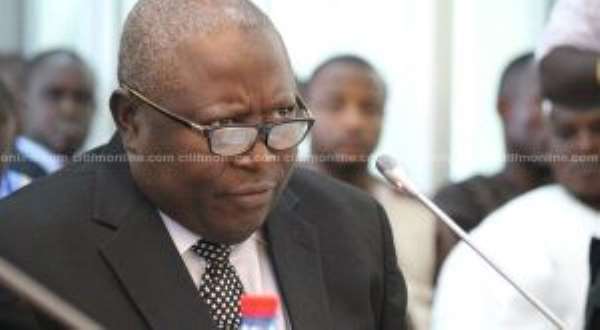 Well, I have read Nana Bediatuo Asante’s rather morally sobering and edifying rejoinder to the rather inexcusably scandalous and gratuitously vindictive parting shots of the recently resigned Independent Special Prosecutor and cannot but heave a great sigh of disbelief and relief (See “Re: Resignation of Appointment as Special Prosecutor” Ghanaweb.com 11/18/20). The 40-paragraph rejoinder is embedded in a news article captioned “I Never Interfered with Your Work – Akufo-Addo” (3 News.com / Ghanaweb.com 11/18/20), incredulously documents the perennial, peevish and deliberate attempt by the dismissed former Attorney-General and Minister of Justice from the cabinet of the late President John Evans Atta-Mills to sabotage and effectively derail the terms of reference of the Statutory Act, 959, that brought the administratively seminal and critical Office of the Independent Special Prosecutor (OSP) into existence and operation.

The afore-referenced rejoinder clearly evinces what may be aptly termed as Mr. Amidu’s legitimate desert of the raw deal accorded Ghana’s longest-serving Deputy Attorney-General and Deputy Minister of Justice by both the late President John Evans Atta-Mills, the man who once selected Mr. Amidu as his Presidential Running-Mate, and former President John Dramani Mahama, the man who made absolutely no attempt to either professionally rehabilitate or redeem the scandalously fired Atta-Mills’ cabinet appointee. The fired and effectively sidelined Mr. Martin ABK Amidu would take his withering humiliation and grievances to the media by prolifically writing and publishing reams of lengthy and legalistic articles pointing to the fact of a sustained attempt by the then President John Dramani Mahama to have Mr. Amidu either summarily rendered politically toothless or existentially defanged and possibly physically liquidated.

These dastard attempts to finish off the dismissed Atta-Mills cabinet appointee, in the words of the target of political persecution and vindictiveness himself, was all because Mr. Amidu had stubbornly and relentlessly and flatly refused to back down from the downright criminal attempt by both the then President Mills and Vice-President Mahama to protect Mr. Alfred Agbesi Woyome from returning the criminally extorted sum of GHȻ 51.2 Million, which the single most thievish Ghanaian mega-scam-artist and infamous foremost underwriter or financier of the National Democratic Congress (NDC) had literally stolen from Ghanaian taxpayers with the collusive, collaborative and criminal complicity of the entire stable of the top-echelon leadership of the Chairman Jerry John Rawlings-founded juggernaut establishment of the so-called National Democratic Congress.

Now, it turns out that the man who has been playing patriotic and innocent victim of the movers-and-shakers of his own political party may be nothing short of a masochistic and an ungrateful charlatan, as well as a strategic saboteur of the man who sincerely and fruitfully attempted to facilitate the moral self-redemption of Mr. Amidu, by turning the latter into something that the longtime right-hand man of Dr. Obed Yao Asamoah, Ghana’s longest-serving Attorney-General and Minister of Justice, was not and could never be, that is, a veritable national purse – or treasury – protecting patriot. According to the afore-referenced 40-paragraph memo-cum-rejoinder by the Executive-Secretary to President Addo Dankwa Akufo-Addo, for approximately all the 24 months-plus that Mr. Amidu substantively occupied the seminal post of Independent Special Prosecutor, all that the appointee did was to needlessly and indecisively quibble over the choice of residential facilities for housing the Office of the Special Prosecutor (OSP).

On nearly ten occasions, Nana Bediatuo Asante tells us in his rejoinder, Mr. Amidu flatly rejected housing facilities for occupancy by himself and staff of the Office of the Special Prosecutor who, by the way, the well-favored appointee had the statutorily discretionary privilege to determine, but for reasons best known to himself, Mr. Amidu never did. Among the litany of grievances listed in his parting shots missive to the general Ghanaian public, Mr. Amidu would intemperately and virulently accuse the Akufo-Addo Presidency of deliberately jampacking his staff of fiscal/financial malfeasance investigators with public employees on secondment or temporary assignment from the various accounts and auditing departments and agencies of the government or civil service. In other words, Mr. Amidu shamelessly attempts to fault President Akufo-Addo for the resigned Special Prosecutor’s own gross administrative incompetence.

In the three weeks, or so, left before the 2020 general election, the Communications Team and Directorate, so-called, of the ruling New Patriotic Party have a bounden obligation to let the Ghanaian people know the fact that Mr. Amidu may very well have vigorously lobbied for the highly sensitive and powerful post of Independent Special Prosecutor, in order to strategically sandbag or sabotage an unprecedently successful Akufo-Addo-led government of the New Patriotic Party. But that Mr. Amidu belongs to a political party that its own acclaimed Founding-Father, the late Chairman Jerry John Rawlings, regretfully and interminably and incessantly characterized as the most thoroughgoing corrupt of its kind in the postcolonial era, ought to have given the man who kindheartedly and candidly appointed Mr. Amidu to the job, in retrospect, grossly misguidedly believing that he was the best qualified and the most suitable candidate for the job, great pause for concern. A good lesson painfully learned, of course.

In the end, the abrupt and scandalous departure of Mr. Amidu should give all well-meaning Ghanaian citizens and patriots some critical and lasting lessons in the age-old maxim of: “All that glitters is not gold.” As it turns out, all the moral grandstanding and public bluster and all, Mr. Amidu was merely that proverbially irredeemable fake nugget of gold that was waiting, all along, to be delightfully exposed in the nick of time. It also well appears that the recently resigned Independent Special Prosecutor had a personal agenda against Mr. Kenneth Kuntunkununku Ofori-Atta, the Akufo-Addo cousin and incumbent Finance Minister, which the departing Mr. Amidu may have decided to revenge by opportunely and conveniently using the admittedly troubling Agyapa Gold Investment Deal Report as a façade to unleash, in the name of corruption-risk and anti-corruption assessment, in view of the fact that, according to Nana Bediatuo Asante’s rejoinder, Mr. Amidu had rather capriciously and paranoically flatly refused or prevented Mr. Ofori-Atta from responding to, as required or permitted by law, prior to publicly rushing to the media for the publication of the contents of the aforesaid report before the President had had any opportunity to review the same, by both law and established protocol.

Ultimately, what needs to be underscored here is the apparent flat refusal by Mr. Martin Amidu to investigate the globally well-publicized role played by former President John Dramani Mahama in the European Airbus SE Payola Scandal, on the rather curious grounds that while he was vigorously campaigning to be returned to undeserved power, Candidate Mahama could not be investigated for the criminal perpetration of grand extortion against the very Ghanaian citizens and voters whose mandate the former President was shamelessly and criminally seeking, once again, to be allowed to literally take them to the cleaners. In short, the virulent and venomous parting shots by the recently resigned Independent Special Prosecutors tell Ghanaians more about the questionable character profile of Mr. Martin ABK Amidu, himself, than about what really transpired during the latter’s tenure as a cardinal executive operative of the Akufo-Addo Administration. We are also told, by the way, that Mr. Amidu had more than enough operating funds to have paid his own salary and that of the Deputy Independent Special Prosecutor, both of whom Mr. Amidu claimed, had not been paid for two years. So much for the political shenanigans of self-proclaimed citizen vigilantes.