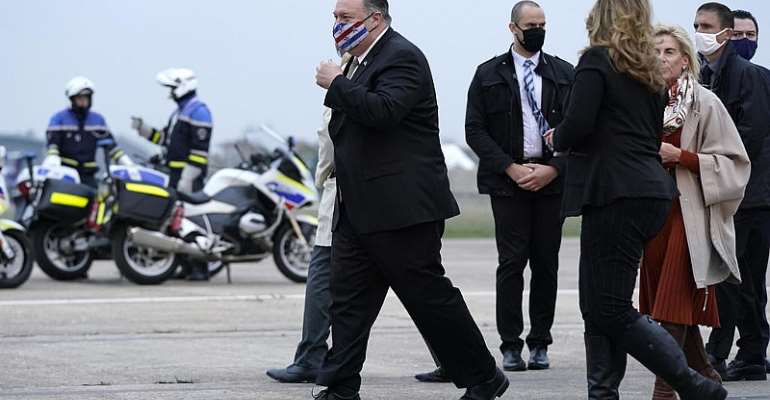 Emmanuel Macron has met US President Donald Trump's Secretary of State Mike Pompeo behind closed doors with all eyes on their encounter just nine days after the French president congratulated US President-elect Joe Biden on his election victory.

Neither side said much in advance about Pompeo's low-profile visit to Paris, which was his starting point of a seven-country tour of Europe and the Middle East.

The reason for his three-day stop in Paris in the midst of a pandemic appeared unclear. Macron's office described the stop over at the Elysée as a “courtesy” visit.

Before the scheduled meetings with Macron and his foreign minister, Pompeo laid a bouquet of red, white and blue flowers at a memorial to victims of terrorism at a Paris landmark, the Hotel des Invalides.

The ceremony lasted about a minute.

No press conference was scheduled, seemingly ruling out the likelihood of journalists getting to ask Pompeo or Macron about their conflicting visions of the US election outcome.

However, Pompeo tweeted that he had an "important discussion" with "my good friend French Foreign Minister Jean-Yves Le Drian today in Paris to reinvigorate our joint efforts toward global peace and security," adding that "there is no challenge we cannot conquer when the US-France Transatlantic relationship is strong."

Officials in Pompeo's team said French authorities told them that no press access was possible due to concerns over the Covid-19 pandemic, with Paris under lockdown aimed at slowing the spread of the coronavirus.

Pompeo has not accepted Trump's election defeat. His trip is aimed at shoring up the priorities of the outgoing president's administration.

In an arrival tweet Saturday in France, he laid out the standard diplomatic groundwork for his Paris talks, noting that France is the “oldest friend and Ally” of the United States. “The strong relationship between our countries cannot be overestimated,” he tweeted.

From Paris, Pompeo was expected to travel to Turkey.

No meeting with Turkish officials were scheduled during the brief visit to Istanbul, a senior State Department official who was not authorised to speak publicly about Pompeo's agenda said last week.

The stop in Turkey will focus on promoting religious freedom and fighting religious persecution, which is a key priority for the US administration, the official said.

Pompeo will discuss religious issues with the Ecumenical Patriarch of Constantinople Bartholomew I, considered the “first among equals” in the Orthodox world, and with the apostolic nuncio to Turkey, Archbishop Paul Russell.

The trip will also include visits to Israeli settlements in the West Bank that have been avoided by previous secretaries of state.