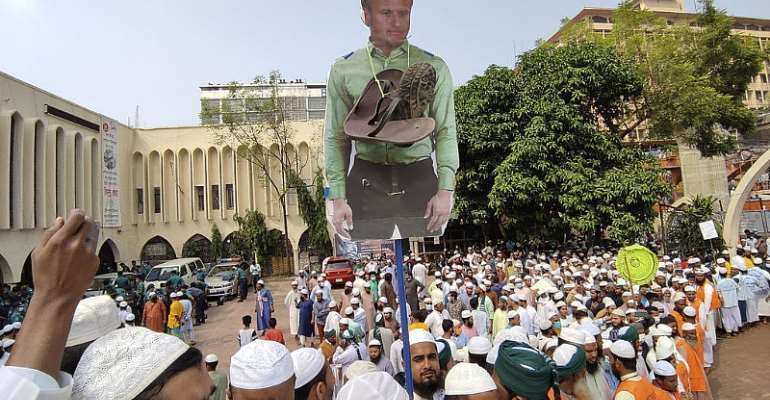 Thousands of protesters took the streets of Dhaka, Bangladesh on Tuesday, calling for the boycott of French products, while Iran has summoned France's ambassador, accusing French President Emmanuel Macron of 'fuelling extremism'. These displays of anger come after Macron defended the right to publish satirical cartoons depicting the Prophet Mohammed.

Bangladesh and Iran are just the latest countries to express anger over comments made by French leader Emmanuel Macron concerning freedom of expression, and in particular the right to publish satirical cartoons depicting the Prophet Mohammed.

In the Bangladesh capital Dhaka, a rally, organised by the Islami Andolon Bangladesh (IAB) party, was staged in front of Bangladesh's biggest mosque.

Police estimated that more than 40,000 people took part in the march which was halted before it could get close to the French embassy in Dhaka.

Protesters chanted "Boycott French products" and called for President Macron to be punished.

"Macron is one of the few leaders who worship Satan," Ataur Rahman, a senior Islami Andolon told the rally at the Baitul Mukarram national mosque.

Rahman called on the Bangladesh government to "kick out" the French ambassador.

Secular values
Hundreds of officers used a barbed-wire barricade to stop the protesters who broke up without violence.

The outpouring of anger comes in the wake of the murder of a French history teacher on 16 October after he showed satirical cartoons of the Prophet Mohammed in his history class.

In paying tribute to Samuel Paty last Wednesday Macron said he "was killed because Islamists want our future", but France would "not give up our cartoons".

"We will always be on the side of human dignity and universal values," he insists.

State secularism is central to France's national identity, and it is argued that freedom of expression should not be curbed to protect one particular community.

Cartoons, such as those published in the satirical weekly Charlie Hebdo, have become identified with a proud secular tradition dating back to the French Revolution.

Earlier this month, Macron unveiled a plan to defend France's secular values against a trend of "Islamist separatism" and described Islam as a religion "in crisis".

Macron's comments on Islam and free speech have led to a diplomatic showdown with Turkey.

On Saturday, Paris announced it was recalling its envoy to Ankara and on Monday, Turkish President Recep Tayyip Erdogan joined calls for a boycott of French goods.

"Fuelling extremism"
Iran on Monday summoned a senior French envoy, Florent Aydalot in protest against the French authorities' insistence on supporting the publication of cartoons.

His ministry said it was "regrettable to incite Islamophobia and spread hatred in the name of freedom of expression, which should serve communication, empathy and coexistence."

Several Iranian newspapers attacked Macron on Tuesday, including the Javan daily which on its front page ran a picture of a smiling Macron with the headline "Evil!"

French goods have already been pulled from supermarket shelves in Qatar and Kuwait, among other Gulf states, whereas in Syria people have burned pictures of Macron.

More protests are planned on Tuesday in the Jordanian capital Amman.

Flags burnt
Macron has also drawn fire in other Muslim-majority countries, including Pakistan and Morocco.

Libya's UN-recognised Government of National Accord also "firmly condemned" his comments, demanding an apology, while French flags have been torched in the Libyan capital Tripoli.

The Palestinian Islamist group Hamas, the Taliban in Afghanistan, the Lebanese Shiite movement Hezbollah have also spoken out against France.

Protesters also gathered outside the French embassy in Baghdad with a cleric demanding an apology from the French leader.

And in Algiers, the High Islamic Council condemned Macron's "virulent campaign" against Muslims.

"It is unfortunate that [Mr Macron] has chosen to encourage Islamophobia by attacking Islam rather than the terrorists who carry out violence," he said on social media.

Akufo-Addo not bound to nominate recommended MMDCE hopefuls ...
32 minutes ago