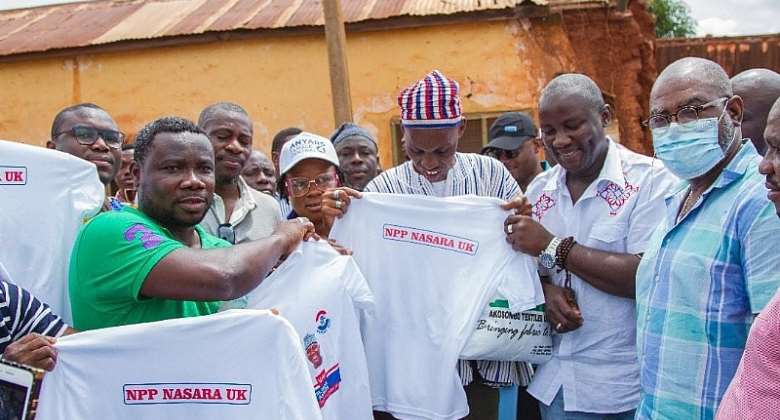 The NPP UK Nasara Wing, as part of its project, has donated various items to 3 adopted constituencies in the Oti, Northern, and North East regions currently held by NDC MPs.

The research team identified and adopted Tamale Central, Nkwanta North, and Yagba/ Kubori constituencies among others and carried out need assessment with the view of supporting them in this year’s election.

On the first phase of the support, logistics such as branded T-shirts and stickers were donated to the aforementioned constituencies in support of the 2020 elections.

The Nasara UK Team initially paid a courtesy call on the National Nasara Coordinator, Alhaji Abdul Aziz Futa to participate in the burial and Adua of Alhaji Nasiru Maigah (Nasara Founder). Alhaji Futa was also briefed on the Diaspora Wing’s activities and also took on board his suggestions and admonitions. Sample t-shirts were presented to Dr Ibrahim Anyas, Tamale Central PC, and NABCO CEO.

On Monday 5 October 2020, Alhaji Futa led the UK Nasara team to present the bulk of the donations to Number 16, the party research/donation centre. Mr. William Ofori Atta & his Team received the items on behalf of the party.

In a brief remark before presenting the items, Faisal Acheampong standing in on behalf of the NPP UK Nasara Coordinator, Issah Ayumah indicated that the donation was the Wing widow’s might aimed at ensuring that the NPP won the 2020 general election.

Alhaji Futa received the items on behalf of the Party Nasara Wing. He thanked the wing for such a generous gesture. He said, ’these items will go a long way to support our 4more4Nana victory in this year’s elections’. He urged all patriots to continue to unite for a massive victory for elections 2020.

The beneficiary constituencies showed their appreciation to NPP UK Nasara Wing for their continuous support and promised to make the best out of the donations for round 2 victory for the NPP.

Security delegation from Accra land in Nkoranza over murder ...
21 minutes ago