One killed in Ivory Coast as tensions rise ahead of vote 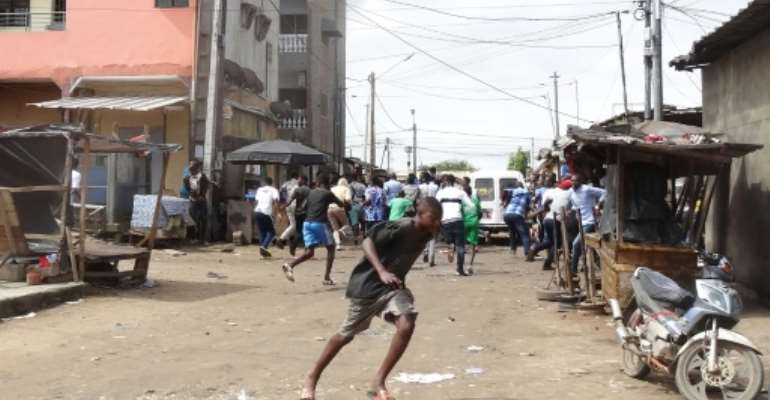 The pre-election tensions are raising fears of a crisis similar to that of a decade ago during which some 3,000 people died. By PATRICK FORT (AFP)

One person was killed and a dozen were seriously injured on Monday during an opposition protest near Ivory Coast's main city Abidjan, a local mayor said, two weeks ahead of a contentious presidential election.

Most of the protesters were youths, who had set up roadblocks on the main road to neighbouring Ghana from the town of Bounoua, a onetime stronghold of former first lady Simone Gbagbo.

Another two people died at the weekend during ethnic clashes linked to the election in Bongouanou, fiefdom of opposition candidate Pascal Affi N'Guessan, who said his home was burned down.

The tensions, which already saw around 15 people killed in August and September, have fuelled fears of a conflict on a scale of the one that engulfed the West African state a decade ago.

Also Monday in Abidjan, students responding to a call for protests from the opposition-aligned Fesci labour union set fire to at least one bus and two cars in the city's Rivera 2 district, an AFP journalist said.

Security forces clashed with students who had torched cars and barricaded several streets in the Cocody neighbourhood where the Felix Houphouet-Boigny University is located.

Other incidents were reported in the towns of Dabou and Divo, and in the capital Yamoussoukro, according to witnesses and a security source.

The regional ECOWAS grouping, making a second diplomatic mission to the country in a week, urged the government and opposition to make "considerable efforts" to tamp down the tensions.

The 15-member Economic Community of West African States also urged two opposition parties on Monday to "seriously reconsider their decision to boycott the election, and their call on their supporters to engage in civil disobedience".

President Alassane Ouattara is seeking a third term in the October 31 election, with critics saying the bid breaks with constitutional limits in Ivory Coast, the world's top cocoa producer.

The president says a 2016 reform allows him to run again by resetting the limit on the number of terms.

Ouattara had announced in March that he would not seek a third term, but he changed his mind after his preferred successor, prime minister Amadou Gon Coulibaly, died of a sudden heart attack in July.

The opposition has allowed doubts to swirl over whether it will boycott the vote, last Thursday urging supporters to boycott "electoral operations" and campaigning, while stopping short of withdrawing its three candidacies.

Dozens of would-be candidates were barred from running in the election, including former president Laurent Gbagbo and ex-rebel chief Guillaume Soro, both of whom played key roles in the 2010-11 crisis.

Supporters of incumbent president Alassane Ouattara say he is allowed to run for a third term, which the opposition disputes. By SIA KAMBOU (AFP)

In addition to Ouattara and Affi N'Guessan, former president Henri Konan Bedie and former parliamentarian Kouadio Konan Bertin are in the running.

Listing the opposition's demands on Sunday to the visiting ECOWAS delegation -- notably for Ouattara to scrap his contentious third term bid, and for sidelined candidacies to be authorised -- Affi N'Guessan vowed "to fight until these demands are met."

Hundreds of residents could be seen fleeing the area on foot, wearing backpacks or carrying sacks of belongings on their heads.

It’s beyond debate; Akufo-Addo has completely mismanaged Gha...
47 minutes ago

My morale is down – Angry Inspector reacts to mass promotion...
51 minutes ago