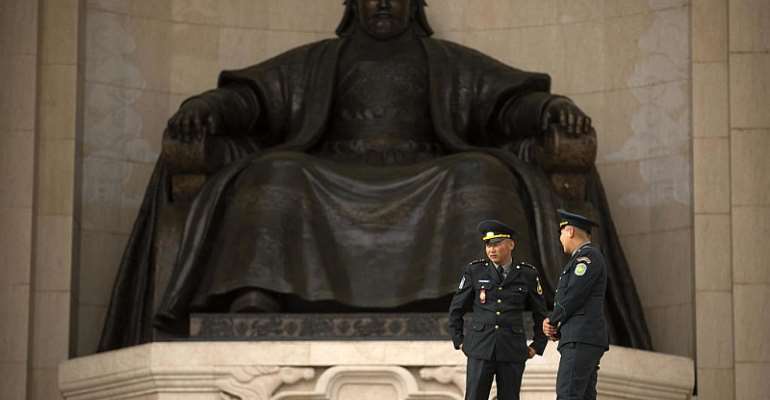 A museum in France has decided to postpone an exhibition featuring Genghis Khan, legendary leader of the ancient Mongol empire, after Chinese authorities demanded a change in the title and complete access to exhibit descriptions.

The event was heralded as “one of the most comprehensive exhibitions on Genghis Khan and the Mongol empire ever presented internationally” by Edinburgh-based organisers Nomad Exhibitions which initiated the cooperation with the Inner Mongolia Museum in Hohhot, capital of China's Inner Mongolia Autonomous Region, in 2007.

After ten years work to “establish a relationship” and win the trust of the Chinese partner – many objects have never before left China –  Nomad found the Dutch National Military Museum ready to host the exhibition for the first time, and it was launched in 2017 under the title “Genghis, Rise of the Mongol Khans.”

The “Genghis” exhibition had positive reviews, even from China's state-controlled Xinhua News Agency which said that the Dutch exhibition provided new insights into Genghis Khan.

The idea was that Ghengis would continue conquer the world, this time as a travelling exhibition.

But that hasn't happened – yet.
After some years of preparation, Genghis was scheduled to arrive in the History Museum of Nantes, France, at the Chateau des ducs de Bretagne. The exhibition, entitled "Son of heaven and the steppes - Genghis Khan and the birth of the Mongol empire" was to have opened on 17 October.

On 13 October, the museum suddenly announced that the exhibition was cancelled. It said that authorities of the Chinese Cultural Affairs Bureau wanted to change the exhibition's title, taking out the words “Genghis Khan,” “empire” and "Mongol”.

Bertrand Guillet, Director of the museum, said in a statement that the Chinese also wanted “control over all our productions, texts, maps, the catalogue, press releases.”

An edit, proposed by Beijing “included biased rewriting aimed at completely erasing Mongolian history and culture in favor of a new national narrative,” according to Guillet.

The exhibition is now planned to open in 2024, with artefacts provided by other, non-Chinese, museums.

No room for Mongolian nationalism

Guillet has reason to worry. The homepage of the Inner Mongolia Museum's website opens with an eye-catching red-and-yellow banner featuring not Mongolian artifacts but the Forbidden City in Beijing, a section of the Great Wall, and the text “Follow the Party Forever, Together Build the Chinese Dream,” a slogan coined by Xi Jinping. Everything is dominated by Han Chinese, and nothing initially points at Mongol culture.

A page deep inside the website does show an extensive history of the Mongols, illustrated by a video presentation of the museum's “explainer” Buhe Chaolu, an ethnic Mongolian himself. The exhibition, here called Tianjiao Menggu (“Heavenly, Proud Mongolia”) – carries no initial references to Genghis Khan or his vast empire.

Later, the text does refer to how Genghis Khan “founded the great Mongol empire” which conquered China and founded the Yuan Dynasty (1271-1368).

But the story stops there, without a single reference to how Mongolia was conquered by the non-Chinese Qing dynasty (who were Manchurian). There is no explanation of how Outer Mongolia split off after the 1911 revolution, nor of how the Chinese Communist Party brutally re-established control over the territory called the “Inner Mongolia Autonomous Region,” moving Han-Chinese to Mongolian lands so that Mongols are now a minority in their own territory.

Recently, China seems to have hardened its policy towards its minorities. Last month, Mongolians in the Chinese Autonomous Region of Inner Mongolia demonstrated against government plans to strengthen Chinese language education at the expense of their native Mongolian.

Tibetan and Uyghur areas have also complained of a shift in language education -  a direct result of current Party Secretary Xi Jinping's apparent attempts to integrate China's minorities with the dominant Han-Chinese by means of "ethnic contact, exchange and blending," a catchphrase initially invented by Xi's predecessor Hu Jintao, but today made into a national policy intended to further subject the minorities - in some cases, as in Xinjiang, by brute force.

Beijing's attempts to influence presentations like the Genghis exhibition in Nantes indicate that China's minority policy is now expanding beyond its borders.

Don’t give literal meaning to Akufo-Addo’s response to Torbg...
37 minutes ago