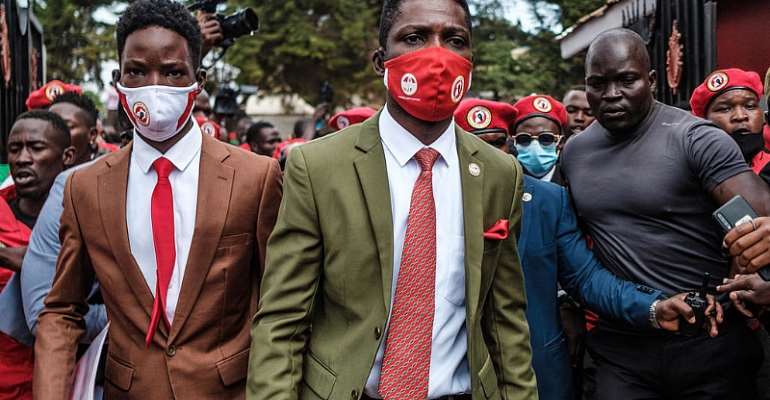 In Uganda, popular opposition politician and singer, Bobi Wine says security forces took documents needed for his presidential bid during a raid on his party office on Wednesday.  Streets were cordoned off as a large deployment of police and military surrounded the building in Kampala.

The police and military called the raid a “cordon and search” operation, to impose a law passed last year which prevents civilians from wearing military clothing.

This includes the red beret, which is worn by a section of the military, but is also the emblem of Bobi Wine, a singer turned politician, now a presidential candidate running against President Yoweri Museveni, who's seeking a sixth term in power in next year's elections.

Brigadier General Flavia Byekwaso, spokeswoman of the Ugandan army, said the aim of the raid was to seize military gear.

“We have seen an increase in abuse of attire that have been gazetted, designs that have been patented by the military and police, seeing members of public donning them”, she said.

Wine's supporters can often be seen wearing the red beret, particularly in Kampala, where he is especially popular among young voters. There were also raids and market vendors arrested in downtown Kampala for selling military-style clothing, and hats bearing the logo of Wine's National Unity Party (NUP) party.

Byekwaso said this can serve as “a warning to the public that they are liable to be arrested for wearing anything similar to military attire and all patented designs for use by police and military”.

Wine's party say that the raid had another aim. With official election nominations and campaigning due to begin in the coming weeks, they say the operation was an attempt to sabotage the campaign of Bobi Wine and prospective NUP MPs.

Party officials say signed nomination documents, a legal requirement to stand as a candidate, were taken, along with cash donated by party supporters for election campaigning. The day before the raid, Wine had announced on social media that the party had raised the equivalent of around 30,000 US dollars in donations from supporters, most of which was to be used to support NUP parliamentary candidates across the country.

With nomination fees at around 800 dollars, these donations are vital to the party's candidates in poorer areas, especially in rural Uganda, a constituency traditionally loyal to President Museveni. The party also says CCTV cameras were damaged and other equipment was removed from their office.

The NUP leader has frequently been a target of the security forces in Uganda. He has been charged with treason and inciting violence, and his driver was shot and killed by police in 2018.

Wine, who was arrested the same day, claims he was the intended target of the shooting.

Like other opposition politicians in Uganda, Wine and his supporters consistently accuse the Ugandan security forces of being a partisan tool used to prop up the president, rather than a neutral force of law and order.

Following the raid, Wine said this was a sign of a president who felt threatened. “Seeing the hundreds of soldiers and police officers deployed today is evidence that the dictator is so scared of us. We are not giving up. We are not giving in!”.

Elections are due to take place in January or February 2021. With campaign rallies banned due to COVID-19, 76-year-old President Museveni has a clear advantage over opposition candidates, who struggle to get equal representation in the media, while the incumbent continues to make televised speeches and public appearances across the country.

However, the popularity of 38-year-old Wine, who presents himself as the candidate of Uganda's poor and jobless youth, remains a challenge to the incumbent, in charge of a country where 75 per cent of the population is under 30.

Museveni has been president since 1986, and is eligible to run next year because of a hugely controversial constitutional change removing the upper age limit for presidential candidates. Wine has said he will defy COVID-19 regulations in order to campaign in person.