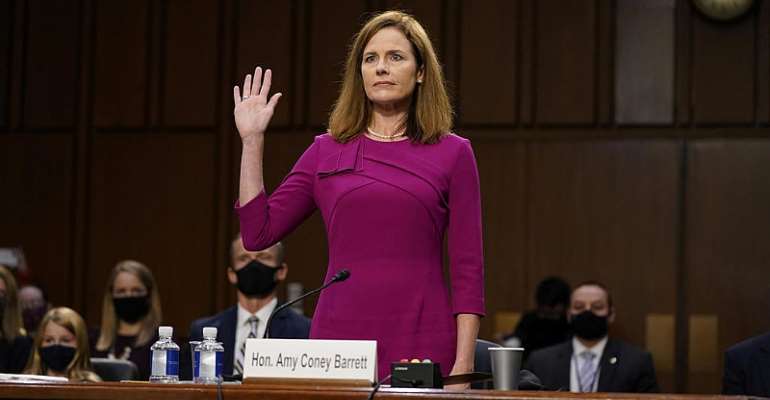 Amy Coney Barrett, US President Donald Trump's nominee for the Supreme Court, is facing tough questions from Democrats at a four-day Senate Judiciary Committee hearing, amid fears that her conservative views on healthcare and abortion could shift the country's highest court  to the right.

In her opening remarks as part of her confirmation hearing, Barrett - a Catholic - vowed to decide cases based on the law rather than personal preferences.

“The policy decisions and value judgments of government must be made by the political branches elected by and accountable to the people,” Barrett said. “The public should not expect courts to do so, and courts should not try.”

Political football
As the third branch of government in the United States, the Supreme Court not only keeps the powers of the legislative and executive branches in check, it often has the last say on significant cases impacting public life.

In 1954, the court delivered a landmark verdict in the Brown v Board of Education civil rights case, ruling that segregation of public schools was unconstitutional.

In recent years, it has become increasingly politicised.

“The trend goes back to the 1980s when Democrats successfully derailed the nomination of Robert Bork, a conservative stalwart, and so since 1987 there has been a number of contentious Supreme Court nominations,” said Simon Grivet, an associate professor in American history and civilisation at the University of Lille.

The last contentious confirmation hearing was in 2018 for Trump's Supreme Court nominee Brett Kavanaugh, who was accused of sexual assault at the time.

“The court has had to intervene in a number of conflicts that could have been dealt with by politicians but because of partisan rivalry in Congress, issues such as gun control, abortion to gay rights, have ended up in the courts,” Grivet told RFI.

Faith and law
The choice of who sits on the Supreme Court, which is composed of nine justices appointed for life, has an important effect on US policy.

For Trump, there is no doubt that Barrett is the right pick. As he returned to the campaign trail on Monday, Trump again lauded his Supreme Court nominee, widely appreciated by conservative Christians, who share many of her values, including an opposition to abortion and same sex marriage.

Some Republicans on the Senate judiciary committee, including Josh Hawley, have accused Democrats of attacking Barrett for her Catholic faith.

“Her faith is not the problem,” said Grivet, echoing similar comments by California senator and Joe Biden's running mate Kamala Harris, who has taken care to point out are "both people of faith".

“It is the fact that she could possibly influence and tilt the court towards the right,” Grivet added.

Despite Barret's insistence that she will keep her faith separate from her legal judgment, Grivet says her previous job as law clerk for the late Justice Antonin Scalia, makes that stance difficult to maintain.

Fears of regression
“She may very well say that she will apply the law as it is written but everybody knows that the job of the Supreme Court justice is to interpret the law and people like her and Antonin Scalia have a very precise orientation, which is deeply, deeply conservative.”

Barrett was named by Trump on 26 September to succeed women's rights champion and liberal justice Ruth Bader Ginsburg, who died eight days earlier at the age of 87.

Democratic senators argue that replacing the progressive Ginsburg with Barrett is likely to have implications for issues like affordable health care and access to abortion.

Senator Patrick Leahy told Barrett on Monday: "My constituents are scared that the clock will be turned back to a time when women had no right to control their own bodies and when it was acceptable to discriminate against women in the workplace.”

But it is the fate of the 2010 Affordable Care Act (ACA) that has crystallised Democrats' opposition to Barrett's nomination.

Democratic senators have sought to portray Barrett as a threat to President Barack Obama's flagship health reform during the coronavirus pandemic and denounced the Republican drive to fast-track her confirmation before the 3 November election.

All to play for
It may seem surprising that the Republican-controlled Senate is rushing to approve Barrett after staging a yearlong blockade in 2016 against Obama's high court nominee, Merrick B. Garland, and also at a time where the United States is in the throes of a pandemic, but not for Grivet.

“It's a tactical move by Republicans. They fear that they may very well lose their majority in the Senate in the upcoming election and so they want to use this opportunity to fill one more seat.”

Barrett's confirmation would give Republicans a powerful 6-3 conservative majority in the Supreme Court.

“Republicans are using the hearings to confirm the judge and to shore up the majority in the court and also to remind voters that even if some of them might dislike Trump, he delivered. Three Supreme Court justices in one term has never happened before,” Grivet said.

For Democrats, the Supreme Court battle is also an election flashpoint.

“They know that they cannot stop the nomination because they are in a minority so they are using the hearings to broadcast a number of election issues to remind Americans that their healthcare is on the line.

Both camps have a lot to play for, Grivet said, in terms of communicating the right message to their voters.

Battle of interpretation
Among historians, the controversy surrounding Barrett's nomination is emblematic of a tug of war between those in favour of the court applying a strict interpretation of the US constitution and those who argue it should apply a progressive view to catch up with modern society.

"The first tendency is often qualified as 'realist' while the second considers the law to be unchanging and intangible," said Didier Combeau, in his book Being American today.

This conflict will likely come to the fore on the issue of abortion rights, amid calls from some Republicans, including Trump, to overturn the 1973 Roe v Wade ruling that protected the procedure nationally.

Barrett has not ruled specifically on abortion before, but her former boss, Justice Scalia, considered Roe v Wade to be a "lie".

How she moves on the issue will say a lot about whether or not the Supreme Court is immune from politics and determine the country's future.