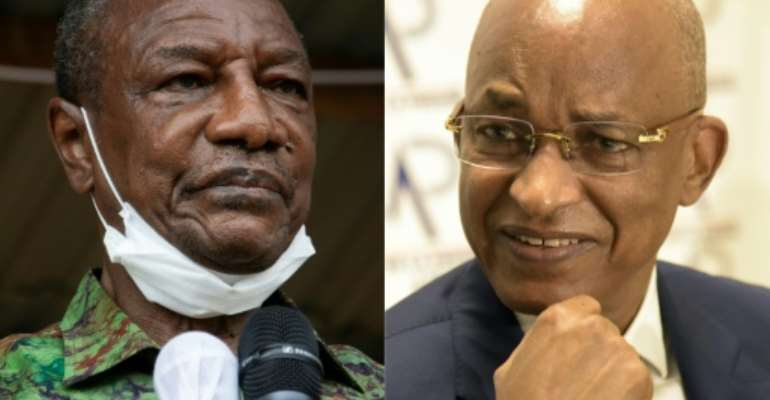 After 10 years in power, Guinea's 82-year-old president is running for a third term on Sunday, defying tens of thousands of protesters who flooded the streets to try to stop him.

A former opposition leader who was once once sentenced to death by an autocrat, critics say Alpha Conde is himself drifting into authoritarianism by plotting to extend his grip on power.

In March, he pushed through a revamped constitution that he said would modernise the country, but which opponents cast as a ploy to stay in office beyond the two-term presidential limit.

"I fought for 45 years, I was an opposition leader," Conde, who is known for prickly outbursts, told French broadcasters this month.

"My opponents are civil servants who became prime ministers after tearing the country to the ground. It's extraordinary that I am considered an undemocratic dictator."

Conde is facing his longtime foe and political opposite, the slender and soft-spoken Cellou Dalein Diallo on October 18.

The 68-year-old was at the forefront of protests against a Conde third term, which security forces cracked down on, leaving dozens of people dead.

Politics in the poor but resource-rich nation of 13 million people are mostly drawn along ethnic lines.

President Conde's RPG party is largely backed by Malinke people, and Diallo's UFDG by Fulani people, although both insist that they are pluralist.

Conde is a former opposition leader who critics have accused of himself drifting into authoritarianism. By CAROL VALADE (AFP/File)

Conde has been married three times and has one son. A snappy dresser, he is also a skillful orator who can work a crowd.

Born in western Guinea in 1938, Conde headed to then-colonial power France at age 15, where he gained a string of diplomas in economics, law and sociology and thereafter taught at the Sorbonne University.

There, he led a French federation of African students and spurred opposition to the dictatorship of Guinea's first post-colonial leader, Ahmed Sekou Toure.

Sekou Toure had Conde sentenced to death in absentia in 1970.

He returned to the country in 1991, seven years after the dictator's death, and contested presidential elections in 1993 and 1998.

But his continued activism was deemed a threat by then president Lansana Conte, who had him arrested just after 1998's election. Conde was subsequently jailed.

He finally ascended to the presidency in 2010, after defeating Diallo in a runoff vote.

In power, Conde has sought to boost Guinea's lamentable electricity access and overhaul the military, all while combatting an Ebola epidemic that ran from late 2013 to 2016.

Critics cast him as headstrong and authoritarian -- and prone to angry outbursts.

He once mocked students who demanded he provide the tablet computers he had promised during election campaigning.

"You're like baby goats -- 'tablets, tablets'," he said sarcastically, as he performed goat-like hops.

The president has also been dismissive about rights concerns.

Former prime minister Cellou Dalein Diallo is a self-described "technocrat" who has led opposition to Conde. By Seyllou (AFP/File)

Diallo is just as elegant a dresser as Conde. Fond of tailored suits in private, he often dons khaki jackets on the campaign trail.

Graceful and diplomatic, he has recently adopted the quirk of pointing at his watch in public -- to show that Conde's time is running out.

Born to a large family in central Guinea in 1952, he attended both Koranic and French-language schools before studying management in the capital Conakry.

He then entered the civil service under Sekou Toure, before moving to the central bank under Lansana Conte.

He was dismissed in 2006, but to his critics, Diallo remains an apparatchik who symbolises the corruption of the Conte regime.

Diallo became head of the UFDG party in 2007, where he has remained ever since, seeing off hostility from the military junta that deposed Conte, and then leading the opposition to Conde.

Diallo has lost two elections against Conde, which he suspects are unfair. But he is convinced that he will win on Sunday, pointing to Conde's "catastrophic record".

His decision to run again is controversial among some Guinean opposition supporters, who view his presidential bid as a legitimisation of Conde.

But Diallo says he is running to stop a third term, and for other supporters, his long experience in government stands in his favour.

The opposition politician said during a news conference in Senegal last month that, now more than ever, he has learned the will "to win and hold on to victory".

Desist from faking kidnapping to avoid imprisonment – Police...
30 minutes ago