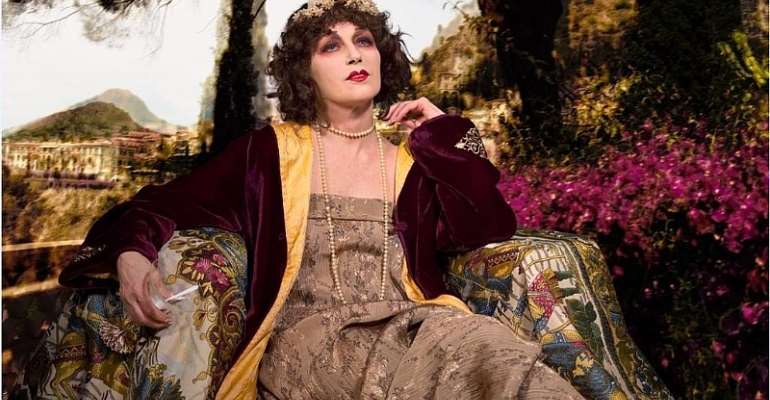 The Fondation Louis Vuitton modern art museum in Paris has reopened after a six month closure due to Covid-19, with a stunning retrospective of the American photographer Cindy Sherman. The 170 works from 1975-2020 are an invitation to play hide and seek with the artist, whose portraits perpetually question the notion of beauty and femininity and the power of reinvention.

Roll up, roll up, come one, come all! Welcome to the world of American photographer Cindy Sherman, a colourful, magical place, inhabited by strange and wonderful people, or should we say, person.

The retrospective (23 September- 3 January 2021) is the first major exhibition of the artist in France since 2006, giving visitors a unique insight into her work over a 40 year period.

It's a project which fills the entire gallery space at the Fondation Louis Vuitton, designed by American architect Frank Gehry.

The curved walls of the huge glass and metal structure rise up out of the surrounding Bois de Boulogne forest on the edge of Paris, like a vessel from outer-space, its cavernous halls and labyrinth of mysterious rooms is the perfect setting for an artist who likes to keep her audience guessing.

Who is Cindy Sherman? She is everyone and she is no-one. But her style is instantly recognizable. The blank stares, the palette of bright colours, the odd poses and eccentric details.

All of Cindy Sherman's works are labelled as "Untitled". They have numbers, but no names – she encourages the spectator to make up the rest of the story.

In her photographs, she's a Hollywood starlet, or the centre-fold for a men's magazine…a leering gentleman, or a ghoulish-looking clown.

On other days, she's a pompous dame, or an ageing film-star à la Sunset Boulevard…the influence of cinema is everywhere; familiar, yet strange.

Using the codes of glossy magazines and film photography, Cindy Sherman's work sets out to question the notion of beauty and femininity, the woman as object, and subject.

Does she really exist?
Cindy Sherman was born in New Jersey in 1954, she studied painting at first, but very quickly moved on to photography. Her base is in New York but she has a strong connection to Paris.

"France is a country of photography, which is very important for Cindy Sherman," curator Olivier Michelon told RFI.

"A large part of Cindy Sherman's work is influenced by the cinema and she is quite inspired by fashion as well which is very French."

It's always been a one-woman show from the get-go in the 1970s. For each shot, the artist establishes a scene, and a persona, then completely transforms herself with clever disguises using make-up, clothes, accessories and even prosthetic limbs and masks.

Her emboldened, clear blue-eyed stare is the only feature that remains a constant, daring the viewer to ask "who is she really?"

Nowhere in the exhibition do we actually see a photograph of the “real” artist.

Hands on
For the Foundation's artistic director Suzanne Pagé, Cindy Sherman was very hands-on when putting together the exhibition, forthright when necessary but not demanding.

"She is not a bossy person, but she has natural authority, she's very determined," she told RFI.

"She's very gentle, but in the end we all agree with her ideas."

It took nearly two years to put it together, with the collaboration of 37 French and international lenders and contact with the National Gallery in London.

Cindy Sherman is not afraid to make herself ugly, or distort her features, in fact, when she began using Photoshop in 2006, she deliberately chose to transform herself…in the opposite way to the diktats of fashion, some of the results are hilarious, some thought-provoking, others kind of sad.

What makes this retrospective so special?
"The tapestries are fascinating," enthuses Suzanne Pagé.

"She provokes surprise using an intangible medium such as Instagram and daringly transposes the photos onto tapestries, the most tangible format possible," she says, referring to the artist's choice of making an old-fashioned art form in complete contrast with the fleeting nature of social media.

Above all, it's an opportunity for people to see how the artist has worked over the years reinventing herself, time and time again and how she has evolved, with age and taken on board new practices.

"She plays with genres, going from masculine to feminine. I find it really spectacular that she defines her presence through these invented visual stories," concludes Pagé.

Not only did Cindy Sherman help put together her own retrospective, she was also implicated in putting together "Crossing Views", a parallel exhibition of 60 multimedia works by international artists from the Foundation's huge collection.

Co-curated by Sherman, it functions as a conversation between a variety of works and artists who inspired her, such as Andy Warhol and those artists she inspired in turn…a never ending cycle.

and "Crossing Views, a new way of looking at the Collection"