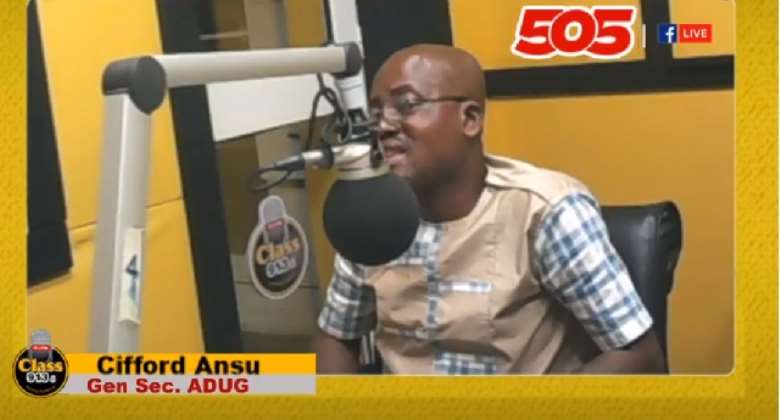 Ghana stands to lose more than GHS802 million in three years, if the Customs Amendment Act, 2020, which bans the importation of accident cars, is implemented, Mr Clifford Ansu, General Secretary of the Automobile Dealers Union of Ghana (ADUG) has told Valentina Ofori-Afriyie on Class91.3FM’s ‘The Manifesto’ segment of the radio station's news analysis programme 505.

According to him, “We are going to lose this money because the law says that if you are able to even assemble one particular vehicle in this country, you have the opportunity and advantage to bring in as many as you can of this particular product into this country without paying a pesewa”.

“So, if this is the case, and you’re asking those of us in the industry that we rather should pay or you’re even increasing our duty – five per cent now to 35 per cent – it means that we rather are going to pay the money to the people who are bringing the cars into the country free of charge”, Mr Ansu noted, adding that the dealers intend going on a 7-day demonstration against the government if it fails to scrap certain parts of the law.

The government of Ghana recently suspended the enforcement of the law, the Tema Regional Chairman of the Ghana Institute of Freight Forwarders (GIFF), Mr Alex Asiamah, revealed.

He said the Customs Commander at the Tema Port made an announcement to that effect.

Mr Asiamah said on Thursday, 17 September 2020 that: “Just this evening, I received information informing the general public, stakeholders and the importing public that, Customs will continue to do their normal clearance of such vehicles.

“So, the importers can go on with their business of importing such cars.

“So, that’s the news at the moment.

“It is coming from the Ministry [of Finance], but through our sector commander, the Assistant Commander of Customs in Tema,” he told Accra-based Citi FM.

According to Mr Asiamah, the ban sparked a lot of anger among importers.

“You could remember that when the news came, importers or dealers in those cars were not happy about it and then it was even twisted in different directions to make it look like something odd,” he said.

“For us, as freight forwarders, we will continue to enjoy our business of providing such cars for our customers and when that one happens, it means we are going to continue to enjoy the service so it’s welcoming news”, Mr Asiamah said.

A few weeks ago, the Coalition of Car and Spare Parts Dealers, Clearing Agents and Artisans in Tema, Spintex and Ashaiman in the Greater Accra Region, in conjunction with Vehicle and Asset Dealers Union of Ghana (VADUG), called off an intended demonstration scheduled for Thursday, 27 August 2020 over the ban on the importation of salvaged cars.

A statement signed by Mr Kofi Asamoah, Secretary, Tema Car Dealers Association, dated Wednesday, 26 August 2020, explained: “This follows a meeting convened by the Minister of Trade and Industry, which was attended by the Commissioner and Senior Officials of the Customs Division of GRA, the Director-General of Ghana Standards Authority and Representatives of the Coalition, as well as the leadership of Automobile Dealers Union of Ghana (ADUG) and Abossey Okai Spare Parts Dealers Association”.

The statement said: “The Minister and the Commissioner of Customs have assured members of the Coalition that their concerns will be addressed during the implementation of the Customs Amendment Act, 2020 and that further consultations will be held in defining the detailed implementation modalities of the Act”.

In its earlier statement serving notice of the demonstration, the coalition said the Customs Amendment Act, 2020, which was expected to come into force in November this year, will have an adverse impact on the sector as far as jobs are concerned.

Ghana banned the importation of cars older than 10 years to encourage international companies including Volkswagen AG and Nissan Motor Co. to set up local plants in the West African country.

The new law also provides import-duty rebates for companies that manufacture or assemble cars in Ghana, according to the act of parliament obtained Thursday by Bloomberg.

The embargo will take effect six months after the manufacturing or assembling of new vehicles in Ghana begin under a special government program meant to draw investment.

Volkswagen, Nissan, Toyota Motor Corp. , Suzuki Motor Corp. and Renault SA are among automakers weighing the local assembly of vehicles in a country where used cars make up about 70% of vehicle imports. Ghana is seeking to become a car-manufacturing hub for West Africa, a region with more than 380 million people.

The import restrictions could cost the government as much as $143 million in customs revenue in the first three years after implementation, according to parliamentary documents. Used-car sellers offer more affordable deals in a country where auto loans are rare.

The law, signed by President Nana Akufo-Addo on April 30, also bans the importation of cars which have been involved in accidents, which dealers bring in and repair to provide even cheaper options to consumers.