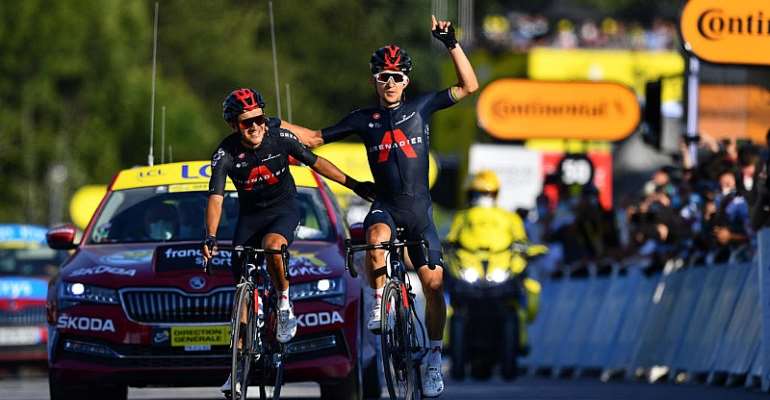 Michal Kwiatkowski won the 18th stage of the Tour de France on Thursday after a stitch-up a kilometre from the finish line.

The Ineos Grenadiers rider crossed the line arm in arm with his teammate Richard Carapaz.

Kwiatkowski's wheel was fractionally ahead though to complete the 175km between Meribel and La Roche sur Foron in four hours, 47 minutes and 33 seconds.

Wout van Aert was third.
"Richard decided that as he had got the king of the mountains jersey, I could go for the stage win," Kwiatkowski told French broadcaster France 2.

"We're going to celebrate as we all deserve it after so many stages. We put on a good show."

On Tuesday night, Egan Bernal, the team leader and defending champion withdrew from the race.

Carapaz will come under pressure from the Slovenians Tadej Pogacar and Primoz Roglic.

Pogacar trails Carapaz by two points in the hunt for the polka dot jersey and is second overall.

Roglic leads his compatriot by 57 seconds and is only seven points behind Carapaz.

Two competitive stages remain in which to decide the final order.

Sunday's last stage between Mantes La Jolie and the Champes Elysées in Paris is traditionally considered a ceremonial procession and not the environment to jockey for positions.