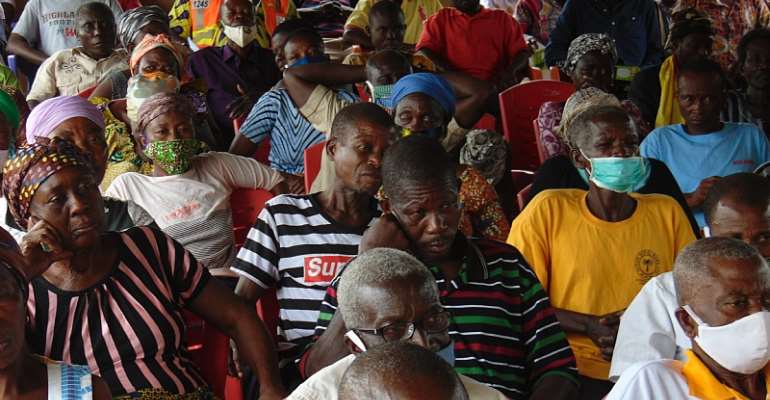 The Cocoa Health and Extension Division (CHED), Hohoe-Kpeve Cocoa District in the Volta Region today, 10/09/2020 held a Mini-Cocoa Farmer Rally at Nkonya Wurupong in the Biakoye District of the Oti Region to sensitize Cocoa Farmers and its key stakeholders on Environmental and Social Sustainability Project (ESSP).

The project spans from 2016-2020 and is jointly implemented by UNDP and the Ghana Cocoa Board (COCOBOD), with support from Mondelēz International with a focus on Forestry and biodiversity conservation; climate change under UN’s Sustainable Development Goal 13& 15.

To achieve the above objectives, Mr. Alarbi-Donkor advised farmers to avoid the use of weedicides in cocoa farming, integrate economic trees comprising of 5 species (Mahogany, Ofram, Kokodua, Hyedua and Mansonia) in the cocoa farms to conserve the land and protect ecosystem. Excessive bush burning and practices that causes bush fires in Cocoa farms was also raised. Felling of trees without replanting was also raised and farmers were advised to desist from the practice.

The Cocoa Technical Officer for the area, Mr. Francis M. Eshun stated that, since he started work in the operational area in late part of 2019, he has facilitated the formation and registration of four Cocoa Farmer Cooperative, viz:

He expressed optimism that Nkonya Ntumda and Nkonya Tepo Cocoa Farmers will soon also register their cooperative society. He added that, since late part of 2019 to now, he has facilitated the delivery of 2 CP Knapsack Spraying Machines; PPEs (gloves, googles, wellington boots, overall and nose mask) to Nkonya 9 Spraying Team of 9 people; 2800 Sachets of Attack Botanical Insecticides; 164 litres of Cocoa Agyenkwa Liquid Fertilizer; 70 litres of Cocoasett; 4000 Sachet of Qualico Fungicides; 230 litres of Sidalco Liquid Fertilizers; 600 Sachets of Fungikill Fungicides; 2500 Seedlings of Cocoa by SPD; 66 economic trees (Ofram) and 14 Sharp power motorized. He added artificial pollination and Cocoa Mass Spraying is ongoing in the Operational Area and appealed to every cocoa farmer to register and be part of the Cocoa Farmer Cooperative to aid extension delivery.

The Municipal Cooperative Director for Kpando Municipality, ( as well as Biakoye and South Dayi), Mr. John Vorvor appealed to the elders of the Communities to release lands for the various Cooperatives to begin a Cooperative Cocoa Farm. He said, that farm will help serve as Demonstration Farm and also raise money for the Cooperative in the long run. He stated, the leadership of the Cooperatives should account to the members each quarter to ensure transparent leadership.

The Cocoa Purchasing Clerk for Nkonya Wurupong, Mr. Eyram Atisu disclosed that, for the 2019/2020 season, Nkonya Wurupong produced One Thousand, Six Hundred and Fifty Two bags (1652) of Cocoa which he purchased. He said, with the current initiatives and efforts by the Technical Officer for the Area, he is sure, the coming season will see a rise in production in the area. He thanked the farmers for the support and Cooperation.

NADMO Director for Biakoye District, Mr. Henry Kojo Danso stated that, the Cooperatives should come together to raise their own nurseries with support from COCOBOD to help expansion of Cocoa Farms. He expressed delight in the lvel of commitment shown by the farmers in cocoa farming and challenged them to do more to ensure increase in production of cocoa in Nkonya.