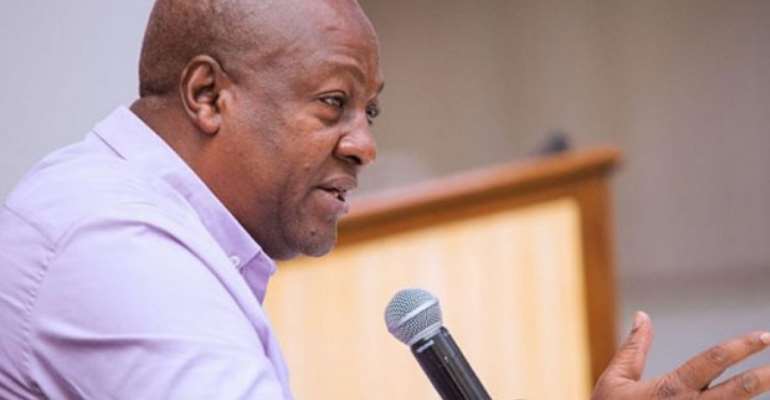 The leadership that Ghana deserves is one of a 'level 5' leader. A 'level 5' leader, according to Jim Collins' 'Good To Great' book, displays a powerful mixture of personal humility and indomitable will. They are incredibly ambitious, but their ambition is first and foremost for the cause, for their organisation they lead, their country and its purpose, not themselves.

Harry S. Truman once said, “You can accomplish anything in life, provided that you do not mind who gets the credit”. A 'level 5' leader is a disciplined person, disciplined in thought and disciplined in action. Ghana in her 63rd year going on to her 64th year onwards to her 70th by 2027 deserves a robust leadership style accredited as a 'level 5' leader. Such leadership asks questions of this nature; First who…then what…confronting the brutal facts, hedgehog in concept, culturally disciplined (respects ethnic perspectives and balances) and technology accelerator. John C. Maxwell describes a 'level 5' leader as one who reaches the pinnacle.

He explains it as the highest level of leadership and also the most challenging to attain. It requires longevity as well as intentionality. You simply can't reach 'level 5' unless you are willing to invest your life into the lives of others for the long haul.

But if you stick with it, if you continually focus on both growing yourself at every level, and developing leaders who are willing and able to develop other leaders, you may find yourself at the pinnacle. The commitment to becoming a pinnacle leader is sizeable, but so are the payoffs. 'Level 5' leaders develop 'level 5' countries. They create opportunities other leaders don't. They create a legacy in what they do. People follow them because of who they are and what they represent. In other words, their leadership gains a positive reputation. As a result, 'level 5' leaders often transcend their position, their country, and sometimes their industry or organisations. There's so much more I'd love to tell you, but let me leave you with this. Leadership is about growth – for yourself, your relationships, your productivity, and your people. To lead well, you must embrace your need for continual improvement, and the '5 Levels' provide a leadership GPS to help you with your journey. You must know where you are, to know where you're going. Otherwise, as the Cheshire Cat told Alice, when you don't know where you're going, any road will get you there. Ghana has more than seventy ethnic groups. Major ethnic groups in Ghana include the Akan at 47.5% of the population, the Mole-Dagbon at 16.6%, the Ewe at 13.9%, the Ga-Dangme at 7.4%, the Gurma at 5.7%, the Guang at 3.7%, the Grusi at 2.5%, the Kusaasi at 1.2%, and the Bikpakpaam a.k.a. Konkomba people at 3.5%. These seventy ethnic groups are what make Ghana Ghana. This is our identity and this identity has not divided us since independence. Ghana has had minimal or almost no record a national chaos of ethnic battles and we believe that each of us from the various ethnic groups believe in the Ubuntu nature of one broom coming together with 1000s of broom strands to be a big broom to use for the development of the country. 'Sakawa' is a Ghanaian term for illegal practices which combine modern Internet-based fraud with African traditionalist rituals. … The rituals, which are mostly in the form of sacrifices, are intended to spiritually manipulate victims so that the scammer’s fraud is successful. The leadership of Kandifo Institute is taken aback by the comment made by the candidate for the 2020 presidential elections of the New Democratic Congress (NDC), Mr. John Dramani Mahama, in bad taste to the entire polity of democracy. No citizen in this country, nor ethnic group must be described in the manner in which Mr. Mahama, a candidate seeking votes from citizens and should understand leadership at the highest level to describe the good people of Akyem Abuakwa as “sakawa”. One would ask? Have we reduced our politicking to ethnic sentiments? Have we lowered the bar that low to move the conversations of issues to tribal commentary? Are we endorsing acts of 'sakawa' which have swallowed some young people in this country, Ghana? Is 'sakawa' now a term and word which should be accommodated by leaders who have represented Ghana at the highest level some years past?

Is the awareness of 'sakawa' by leaders one that should be encouraged or utterly eradicated from the vocabulary of national leaders? The 1994 Rwanda genocide which claimed many lives, destroyed many properties and brought to a standstill the economy of Rwanda started on tribal lines. As a leadership think tank, Kandifo Institute expects that Mr. John Mahama would desist from such ethnic sentiments in his bid to be at the pinnacle of leadership in this country, as that would not be a good foundation for the good people of Ghana. Rwanda has recovered from the 1994 genocide and is today Africa's example of modern infrastructural economy. Ghana is not ready to have tribal wars and we should not have our language seasoned to welcome such. The people of Akyem Abuakwa and the rest of the ethnic groups in Ghana condemn the statement of Mr. John Mahama. It is interesting to note that Nana Sir Ofori-Atta I (1881-1943), the Okyehene or paramount chief of Akyem Abuakwa Traditional Area, was a nationalist, educator, second African member of the Gold Coast Legislative Assembly and a founding member of Achimota School. He was part of Circa 1928, one of the largest and wealthiest kingdoms of the then Gold Coast colony (now Ghana). He was one of the star politicians of the Gold Coast after his knighthood by Queen Elizabeth. Circa 1927 is from the ethnic group which Mr. Mahama describes in this unpleasant way. Leadership is about service and service is about people. Let us build up Ghana and break through our developments.

The writer is the executive director at Kandifo Institute