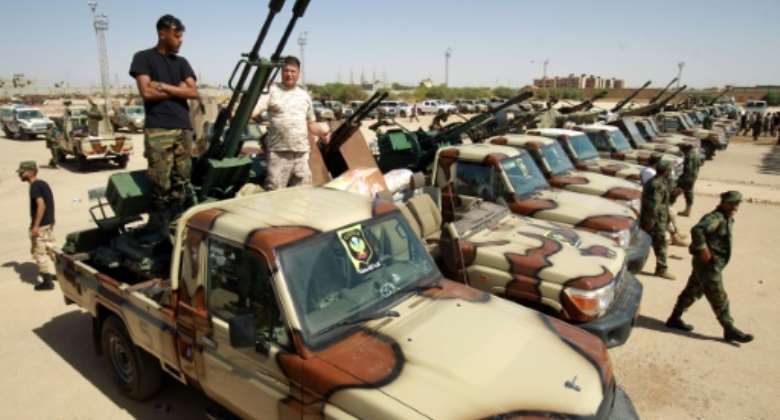 In this photo taken on June 18, 2020, pro-Haftar forces gather in the eastern city of Benghazi, reportedly on their way to back up fighters near the city of Sirte. By Abdullah DOMA (AFP/File)

A spokesman for eastern Libyan strongman Khalifa Haftar has slammed a ceasefire announcement by the rival Government of National Accord (GNA) as a media stunt, accusing it of preparing a new offensive.

Libya's warring rival administrations announced separately on Friday that they would cease all hostilities and hold nationwide elections, drawing praise from the UN, the EU and several Arab countries.

The surprise declaration followed multiple visits by top foreign diplomats to Libya in recent weeks, and came after a series of agreements and pledges that, however, have failed to be implemented.

Friday's statements were signed by Fayez al-Sarraj, head of the UN-recognised GNA, based in the capital Tripoli, and Aguila Saleh, speaker of the eastern-based parliament backed by Haftar.

However, Haftar's spokesman Ahmed al-Mesmari said late Sunday in video message that the GNA statement is "media marketing... The truth is what is happening on the ground".

Haftar launched an offensive to seize Tripoli from the GNA in April 2019, but was beaten back.

Fighting has stalled around the central Mediterranean port of Sirte, the gateway to Libya's eastern oil fields and export terminals, and to the key Al-Jufra airbase to the south.

Turkey and Qatar have backed the GNA, while the United Arab Emirates, Egypt and Russia support Haftar, who is also suspected of receiving French backing.

Mesmari, showing a map of the region around Sirte, charged that "pro-GNA forces intend to attack our units in Sirte and Al-Jufra and then advance towards the 'oil crescent'" further east.

"In the past 24 hours, we have observed Turkish ships and frigates advance towards Sirte," he added, warning that "we will retaliate against any hostile act".

Sirte lies roughly halfway between Tripoli in the west and Libya's second city Benghazi in the east.

Later on Saudi television channel Al-Hadath, Mesmari appeared to tone down his remarks, denying Haftar's side had rejected the ceasefire but claiming the GNA's statement had been "written by Ankara".

Haftar made no mention of the statement from parliament speaker Saleh.

Oil-rich Libya was thrown into chaos after veteran dictator Moamer Kadhafi was ousted in a 2011 NATO-backed uprising.

Rival administrations and militias have been vying for power ever since, increasingly drawing in foreign countries and threatening the region's stability.

Last week, before the ceasefire announcement, German Foreign Minister Heiko Maas warned of a "deceptive calm" in Libya and that outside powers were "continuing to massively arm the country".

Mankessim: Kenkey seller knocked down by a speeding vehicle ...
24 minutes ago