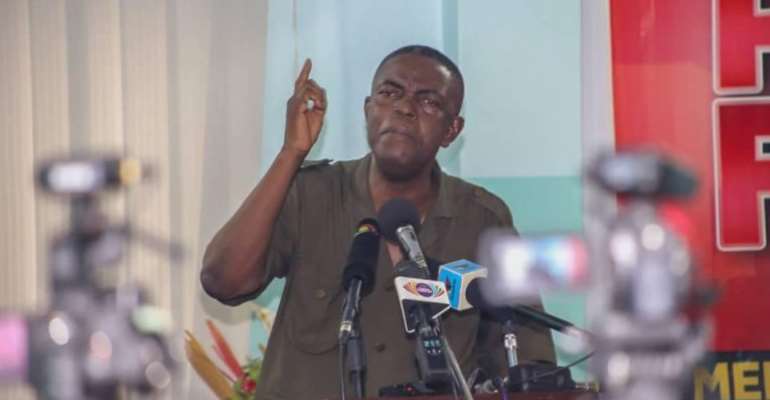 He has already amply exposed the career and professionally snitching Mr. Kwesi Pratt, Jr., Editor-Publisher of the so-called Insight newspaper, so it is rather funny to hear Mr. Samuel Koku Anyidoho threaten to publicly expose Mr. Pratt, if the latter does not stop patronizing Voltaians by cavalierly presuming to second-guess them on their general election voting pattern or trend, which has tended to be heavily skewed in favor of the National Democratic Congress (NDC) – (See “I’ll Expose You If You Don’t Stop Talking ‘Rubbish’ – Koku Anyidoho Warns” PeaceFM.com / Ghanaweb.com 8/12/20).

What brings me to this subject, however, is the rather farcical assertion by Mr. Pratt that historically, the Volta Region, in particular the Anlo-Ewe enclave of the Volta Region, has been in lock-step alignment with the Kwame Nkrumah-led Convention People’s Party (CPP). No such assertion could be at once more patently false and scandalous. Indeed, had Mr. Pratt bothered to check the electoral distribution pattern of the 1956 United Nations-sponsored Plebiscite or Referendum that led to the official incorporation of the former Trans-Volta Togoland into the erstwhile Gold Coast Colony, shortly before Ghana’s Independence, the Kojo Botsio nephew would not be spewing the sort of heretical garbage that provoked the righteous anger of the CEO of the John Atta-Mills Institute.

Mr. Pratt would also do himself some good by accessing the results for the Volta Region of the 1960 Presidential Election, which also witnessed the dubious transitioning of Ghana from a Westminster style of Constitutional Democracy under the aegis of the British Crown into a so-called Republic within the veritable halfway house that is the British Commonwealth of Nations. It was a “dubious transition” because by remaining a bona fide member of the British Commonwealth, Prime Minister Kwame Nkrumah, shortly to be re-designated President, effectively confirmed the misgivings of some of his most ardent detractors that he was, after all, nowhere near the temperament of the “Radical Revolutionary” that he had misled most of his supporters and sympathizers into believing that he was.

All that had happened was the backdoor striking of an agreement with the British colonialists to get the local supervisory or oversight position of the Governor-General or the local representative of Queen Elizabeth, II, or the British Monarch, out of the way in order to enable an Executive President Kwame Nkrumah bring the full heft and brunt of his atrocities to bear smack on the pates of his most formidable and ardent political opponents and detractors, without the direct intervention of the British Crown or Government. This is essentially what the shambolic declaration of Ghana as a Sovereign Democratic Republic was about. Which was also the foremost reason why former President John Agyekum-Kufuor was widely accused of skipping both town and country whenever the anniversary of Ghana’s declaration of herself as a Republic drew near.

We also have absolutely no need to quibble over the downright irrelevant questions of why even as of this writing, for the most part, the Volta Region continues to be deemed as the World Bank or invariable electoral stronghold of the National Democratic Congress. Now, of course, things are fast beginning to change, somewhat, as some of the Voltaians come to grips with the grim realization that for the nearly 30 years of Ghana’s Fourth Republican Democratic Experiment, the Volta Region’s people and their loyalty votes have been taken for granted by the leaders of the National Democratic Congress without the delivery of any substantive development projects in return. But, of course, it can scarcely be gainsaid that the clearly and perennially established general electoral bias of Voltaians towards the National Democratic Congress is indubitably due to the fact of the party’s having been founded by one of their own kinsmen or sons of the soil.

All a good newsman or woman needs to do is take a casual stroll any day and time in one of the principal towns and cities of the region and solicit the honest opinions of any adult residents or citizens of the area who are 50 years old or above, as one investigative reporter did recently, during the compilation of the new National Biometric Voters’ Register, and find things out for oneself. And, of course, we all know that Kwesi Pratt is not a good newsman but only an armchair faux political pundit, thus his vacuous resort to such mendacious and invidiously cheap speculations.