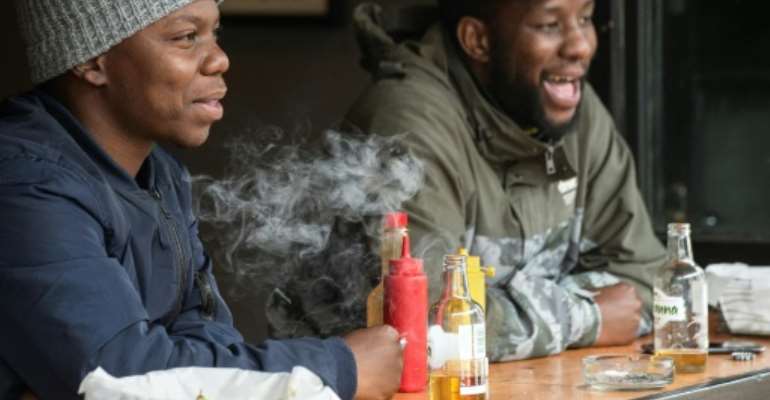 Restrictions have eased in South Africa allowing again for the sale of alcohol and cigarettes. By RODGER BOSCH (AFP)

Cigarette packets flew off the shelves of Wesley's Tobacconist in Johannesburg, South Africa's financial hub, as a strict anti-coronavirus lockdown imposed in March was scaled down on Tuesday.

"It has been extremely busy today," said shop manager Sandra de Wet Postma, concerned about shrinking stock as she rushed between customers.

"At least it's a good sign," she exclaimed, excited to be back at work after an almost five-month break.

Outside, smokers queued eagerly for a new-found puff of their favourite brands.

Ailing South African businesses raised their shutters to the first inkling of normality since the start of stringent restrictions that banned the sale of alcohol and tobacco products.

After months of stifling measures to limit the spread of COVID-19, President Cyril Ramaphosa at the weekend announced the removal of "nearly all restrictions" on economic activities from Monday at midnight.

Tobacco sales have resumed, bars and gyms can reopen and restaurants are now allowed to serve alcohol.

But a night-time curfew remains in place and international borders are still shut.

Authorities banned tobacco sales because of the health impacts of smoking and the risk of contamination between people sharing cigarettes.

A ban on the over-the-counter sale of tobacco products in South Africa led to illicit cigarette deals. By Emmanuel Croset (AFP/File)

Tobacco groups challenged the restriction in court, claiming it had devastated the industry and fuelled illicit trade.

"It's terrible to admit it but I had some illegal cigarettes," said Johannesburg-based artist Jo McLaughlin, stocking up on nicotine liquid at a nearby vape shop.

Store manager JP Charlez explained the company had during the lockdown, scraped by on online sales of nicotine-free flavours.

Battered by the lockdown, wine producers and restaurant owners worried about their ability to "pick up the pieces" in a devastated economy.

Africa's most industrialised country was already in recession before the pandemic, and its economy is now projected to shrink by 7.2 percent in 2020 as a result of the pandemic, the deepest slump in 90 years.

"We are only going to see the full impact in the next six to 18 months," said Wines of South Africa spokeswoman Maryna Calow.

Customers queue while waiting for the opening of a liquor shop in Lenasia, Johannesburg, on Tuesday. By Michele Spatari (AFP)

The industry has lost around seven billion rand ($404 million) and bled over 21,000 jobs since alcohol purchases were first forbidden in March.

The ban -- meant to reduce accidents and ease pressure on hospitals -- was tentatively lifted in June and re-introduced when cases spiked last month.

Calow warned the "road to recovery" would be long.

"It's a great start that restaurants can now serve alcohol," she added. "But how many of them will have weathered the storm?"

Restaurateur Gerald Elliott handed back the keys to his popular Lebanese joint in the once-lively suburb of Melville in June.

The business revolved around a wide range of dishes made fresh, sit-down dinners and drinks.

"We didn't realise how subsidised by booze we were," said Elliott, explaining that the concept was not suited to the take-away option that helped other eateries to stay afloat.

The pandemic has slashed the value of South Africa's seven-billion rand restaurant industry to just one billion ($58 million), according to the Restaurant Association of South Africa (RASA).

"We need to reinvent our businesses and find ways to bring people back to work," RASA head Wendy Alberts told AFP.

Elliott has lost no time.

A woman enjoying her breakfast - coffee and a cigarette - in Johannesburg on Tuesday. By Luca Sola (AFP)

Next month, the 52-year-old will open a day-time deli with an outdoor seating area more suited to the "new normal".

"We had to have a restaurant that is food-centric," said Elliott. "Because in three weeks time, if COVID cases spike, the government will just take booze off the table again."

Ramaphosa has warned it is "too soon to celebrate" a significant drop in new daily confirmed coronavirus cases observed over the past week.