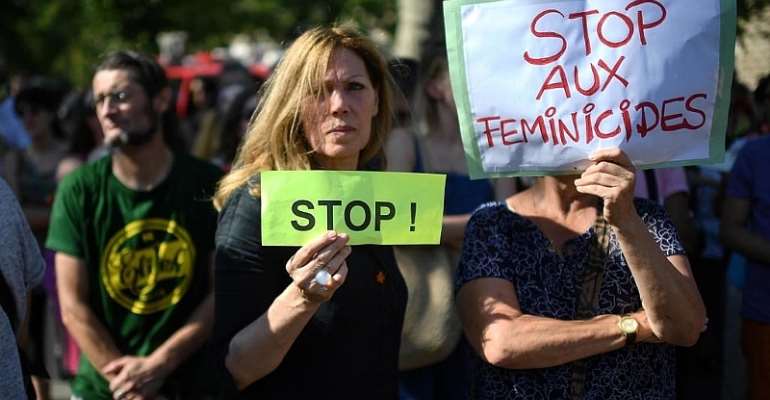 The French interior ministry has released figures which show a 21 percent increase in the number of femicides in France. In 2019, 146 women were killed by their partners or ex partners. Women's associations are pressing for more concrete measures to live up to President Emmanuel Macron's promise of tackling domestic violence.

The number of women killed by their partner or ex-partner in 2019 stands at 146, 25 more than in 2018, according to the latest figures released by the French interior ministry on Monday.

The inquiry found that the victims were mostly between 39-49 years old, or older than 70, and of predominantly French nationality.

The report suggests that men over 70 suffering from illness and problems linked to age were more likely to carry out violent threats against their partner.

The figures are not surprising to women's organisations, who have been trying to for years raise awareness of the problem.

During his presidential campaign, Emmanuel Macron said tackling domestic violence would be one of the "great causes" of his mandate.

Interior Minister Gérald Darmanin has said the police force is using new methods to tackle domestic violence and officers have been given special training.

The government has allocated a budget of 230 million euros to tackling gender-based violence and sexist behaviour, 80 percent of which is covered by the interior ministry, according to the report.

Elisabeth Moreno, the new minister for equality and diversity, says she is determined to reduce the number of femicides by reinforcing cooperation between government offices and partner organisations in the field. Last month she visited shelters for victims of domestic violence, in Chatillon, south of Paris.

In September 2019, a "grenelle", or government summit, was held in consultation with various associations and medical and legal representatives, presided by then-minister for Equality Marlène Schiappa.

Since the end of the consultation period in November, several laws and measures have been introduced, including an electronic bracelet for violent offenders and confiscating firearms belonging to violent partners.

Legislation passed in July, designed to protect victims, increases the jail sentence to a maximum 10 years for harassment within a couple that leads to a partner committing or attempting to commit suicide.

A hotline has also established for women to signal cases of domestic violence - 3919.

According to Solidarité Femmes, a collective of women's organisations which set up the hotline, there were over 10,000 calls in July 2020, 52 percent higher than the same period last year.

The significant rise has been in part attributed to the lockdown period due to Covid-19.

Despite these steps, women's associations are concerned that measures are not being applied quickly enough.

"Marlène Schiappa has not done what should've been done. The main points of the Grenelle have not been put in place, and the means have not been forthcoming to sufficiently protect women," Anne-Cécile Mailfert, president of the Fondation des Femmes told AFP.

"This is a considerable increase (in number of deaths), but it doesn't surprise me...it's an emergency reaction, but words are enough, we need stronger measures," she said.

Some MMDCEs will be approved in December because of controve...
16 minutes ago