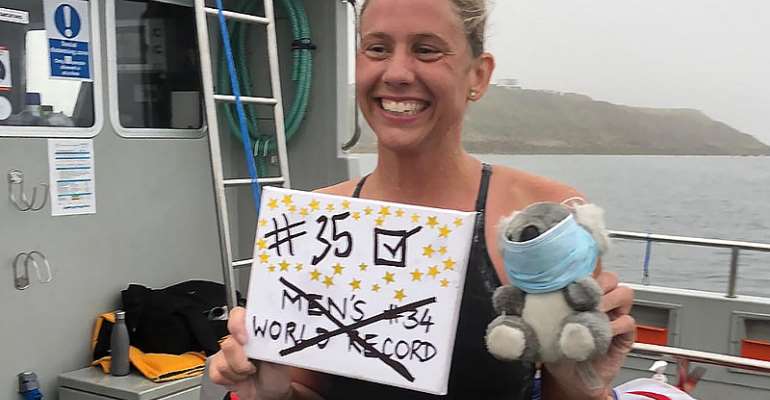 Australia's Chloë McCardel has successfully swum across the English Channel for the 35th time, breaking the current men's record. McCardel said her achievement was aimed at sending a message of hope for victims of domestic violence.

As McCardel celebrated her 35th birthday in May, she was already training hard to achieve her 35th Channel crossing, which she successfully did in 10 hours and 40 minutes on Saturday evening.

Her latest crossing, completed on 16 August saw her overtake the current men's record, held by Briton Kevin Murphy since 2006.

However, she remains in second place overall with another Briton, Alison Streeter, the 43 crossings to her name.

McCardel left the shores of Dover, England, on Saturday evening, arriving in Cap Gris-Nez near Calais, France – a 35 kilometre stretch.

McCardel was given clearance by the British and French coast guards to avoid a Covid-19 quarantine upon her return, (by boat) later on Sunday.

Britain imposed a 14-day quarantine early Saturday morning, for all travellers coming from France due to a recent uptick in the number of Covid-19 infections.

McCardel took the opportunity to signal that her efforts were towards bringing awareness to a "a cause bigger than myself."

As a survivor of domestic violence, McCardel sees herself as giving a voice to those who are caught in difficult situations.

"I'm hoping I can make friends and family proud, that my story will inspire others to never give up and that we can overcome extreme hurdles that life throws at us," she told the press.

"Many might think that what I do needs superhuman strength but at one point in my life I was very vulnerable and suffered from Post-Traumatic Stress Disorder.

"Endurance training has helped me through those challenging periods in my life. I hope my efforts will inspire others – whoever they are and whatever their circumstances – to stay strong and resilient in these difficult times," she said.

Experienced in long distance endurance swimming, McCardel holds multiple world records including the longest ever unassisted ocean swim in the Bahamas in 2014 (124.4km).

She's no stranger to the double Channel crossing either, having already completed the task three times. The quadruple crossing is still on her to-do list.

When not in the water, McCardel spends time giving motivational speeches in companies, schools and at community events and is a marathon swim coach and mentor.