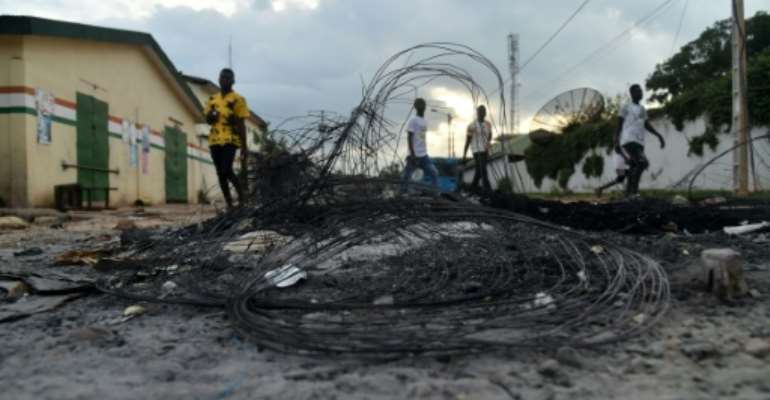 The scene in a Daoukro street last weekend after clashes between local youths from the Malinke and Baoule groups. By SIA KAMBOU (AFP)

Political tension in central Ivory Coast ahead of a looming presidential vote has stoked friction along ethnic lines, in a country still scarred by post-election turmoil nearly a decade ago.

Clashes erupted in the town of Daoukro last Thursday after President Alassane Ouattara announced he would run for a third term on October 31, thanks to a controversial tweak to the constitution.

The protests began in a stronghold of former president Henri Konan Bedie, who is standing again at the age of 86. But two days later, political turbulence lurched into a battle along ethnic lines.

A local man, Apollinaire N'Goran Kouame, 45, was shot dead as he mounted a guard patrol with local youths in nearby Anoumabo, Bedie's birthplace.

Kouame came from the Baoule ethnic group which largely supports Konan Bedie, himself a Baoule.

After Kouame's death was announced, enraged youths armed with hunting rifles, machetes and clubs raced to a part of town which is home to Malinke people, held to support Ouattara.

Spoiling for a fight, the Baoule found Malinke youths on a war footing and gendarmerie police had to intervene to make the two sides back off.

'All we want is peace'

On Saturday, the streets were covered with stones, broken glass and the remains of burned tyres, which had been used as barricades.

In Baoulekro, a district not far from Bedie's residence, several houses were set on fire and most of the inhabitants fled, saying they feared "attacks" by the Malinke.

"All we want is peace," sobbed Marcelline Kouame Aya, a woman in her 30s, in the rubble of her home. 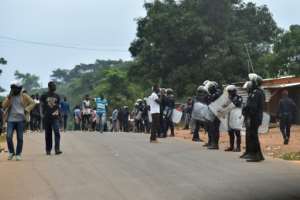 Gendarmes on the edge of a Malinke district in the village of Anoumabo, facing members of the Baoule community. By SIA KAMBOU (AFP)

In the predominantly Malinke district of Dioulakro, all shops and places of business were paralysed.

"We didn't want to prevent them (the Bedie supporters) from demonstrating. It's once they began to smash up the trucks and the shops that we had to defend ourselves to protect our businesses," said a young Malinke on a motorbike, surrounded by his comrades.

"Look at all the damage they've done," he said, pointing to a burned-out shop and the mass of broken glass underfoot.

Security forces set up a buffer zone between the two districts, which they then patrolled.

But he said, "We avoided the worst. It could have been a bloodbath."

More than 3,000 lives were lost in a months-long conflict which divided the country along north-south lines. 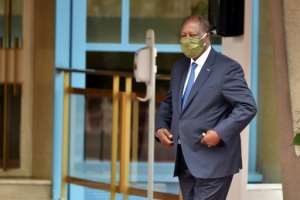 Ouattara, 78, was re-elected in 2015 and last March made it known that he would bow out and pass the baton to his respected prime minister, Amadou Gon Coulibaly.

But that scenario dramatically changed when Coulibaly died of a heart attack on July 8.

With no other appropriate candidate in sight, Ouattara announced on August 8 that he would run for a third term after all.

The constitution limits the number of presidential terms to two, but the authorities and the opposition hotly disagree on the interpretation of a reform passed in 2016.

Ouattara's supporters assert that this amendment takes the number of mandates back to zero. His foes accuse him of seeking a third, unconstitutional term.

Gbagbo was put on trial before the International Criminal Court, which cleared him last year of crimes against humanity. His Ivorian Popular Front (FPI) party has yet to name a candidate.