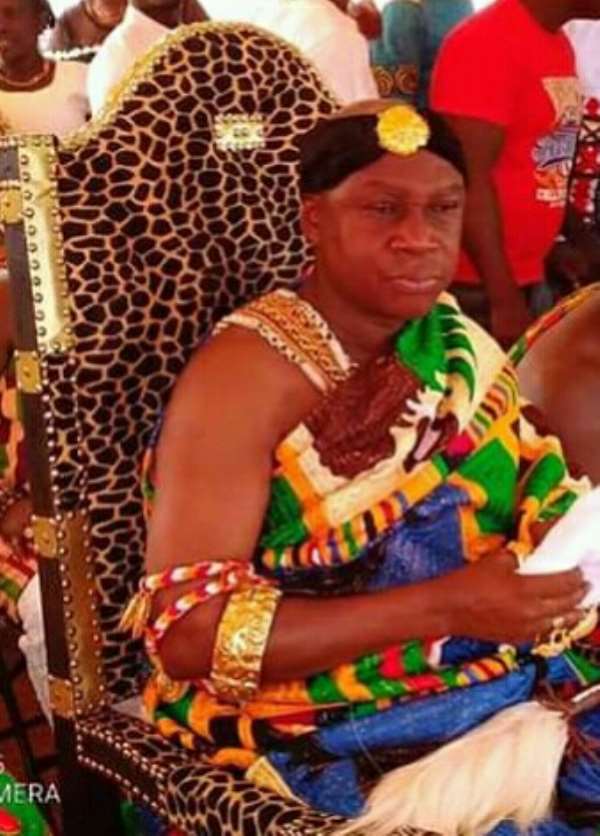 Chiefs in Ahafo Region have commended the Regional Executives of the New Patriotic Party(NPP) over the introduction of an initiative to enhance development in the region.

The Chiefs made the commendation when the Regional Executives used almost a week to tour the six assemblies(Asunafo North, Asunafo South, Asutifi North, Asutifi South, Tano North, and Tano South) constituting the region to inspect government projects and to also thank the chiefs playing an instrumental role in the creation of the region.

The President and Leader of Kenyasi No.1 Traditional Council, Nana Osei Kofi Abiri (II) stated, the initiative which is first of its kind is good because it will push Municipal District Chief Executives (MDCEs) to perform for their people as expected.

According to Nana Osei Kofi Abiri (II), the party's Regional Executives must be bold to question any of the MMDCEs who is underperforming to the satisfactory of the people because by so doing the residents will know that the government and the party leaders at the regional level are not satisfied with their performances.

Berima Twereko Ampem (III), Paramount Chief of Ntotroso Traditional Council on his part said, with this initiative the MDCEs will have it mind that aside residents there are external eyes monitoring their activities been rolled out to boost development for the people.

He stated that Chiefs in the region have been monitoring and assessing them but for the Regional Executives of the governing party to also get involved is a plus and a step in a right direction.

At Goaso the capital of the region, the Leader and President of Goaso Traditional Council, Nana Akwasi Bosomprah explained, the Chiefs in the region are in full support of the initiative designed by the executives because it is in line with the fore idea of the chiefs.

Nana Akwasi Bosomprah mentioned, the main reason that led residents to vote massively for the creation of the Region is to have development and to the chiefs, the key actors to achieve it are the MDCEs who represent the country's President.

He further said, the Municipal District Assemblies(MDAs) in the region to develop, MDCEs play major role therefore for them to be assessed by their own party Executives demands an applaud.

" I urge you to keep this initiative because it's a developmental tool to the regional " Goaso Traditional Council President said.

Nana Akwasi Bosomprah stated categorically that the initiative must be adopted by other regional political party executives to keep MDCEs in check for development to thrive. To him henceforth, MDCEs can not take residents for granted when it comes to raising of developmental projects in the Region.

The Ahafo Regional Chairman for NPP, Kwabena Owusu Sekyere who led the team thanked the chiefs for the role they played in the creation of Region which is gradually yielding good fruits in terms of development kind courtesy His Excellency President Nana Addo Dankwa Akufo - Addo, Ghana's President.

Addressing the chiefs at their respective palace, the Regional Chairman explained, they are aware of what the people are expecting from this government so a decision is made to put up measures to monitor and assess the activities of MMDCEs in the Region.

According to him, politics is about development and numbers so the executives of the party at the regional level will do their best to push MDCEs to work for the residents to help the party secure victory in the December 7 general elections. He assured the chiefs to update them on the outcome of their tour subsequently.

He also urged the chiefs to monitor the developmental activities of the MMDCEs to help build a better region. He however told them that the initiative has come to stay as far as the party remains in power.

The Regional Chairman of the party in his conclusion explained, the initiative will also give them a fair idea of the rapport between MDCEs and the Traditional Rulers who matter as well in terms of developing the assemblies.