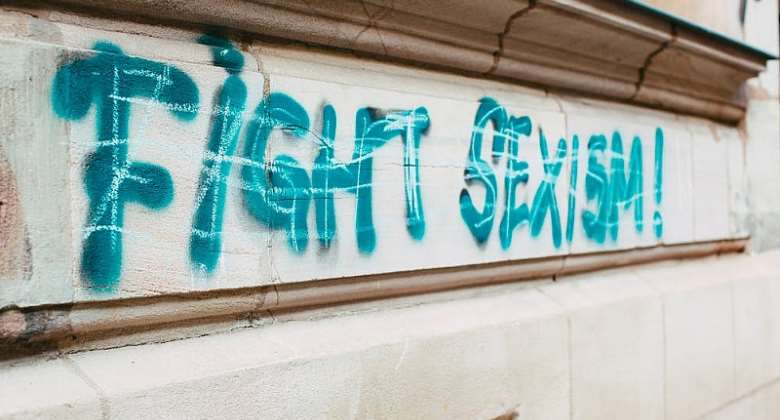 My place is not in the kitchen neither is his in the office. We are all equal irrespective of our sexes and that's why we ought to have equal rights and sometimes responsibilities. Why would you tell me to look after the home while you go out there and make money. It's not like the responsibility of taking care of the home was written on my face right from my mother's womb.

This outmoded notion of inequality remains in the past because that's exactly where it belongs. Nobody is saying women should be in the office while the men take care of the home. Who says women can't be lawyers, doctors,engineers,entrepreneurs and what have you. Yes we can. I don't want to believe that this dead mentally still reigns among us. It's high time society discarded such thoughts and beliefs.

Women are equally great assets to the world as men are. So I don't know why men should feel superior to women.

I believe some responsibilities have been carefully designated for both sexes right from Genesis such that a man can't give birth or breastfeed neither can a woman perform hard chores or carry very heavy loads.There is a need for interdependence here and I believe that is going to help solve this issue of inequality between sexes. It will be impossible to say we don't need each other. Women need men and vice versa.

For instance, it takes a man and a woman to bring forth a child. The woman will definitely need help from the man somehow likewise the man from the woman. In Genesis, God saw the need for a help mate for Adam and not a slave to Adam. I believe God knew that Adam could not live alone and hence the creation of Eve;the bone of his bone and flesh of his flesh. This shows the necessity of interdependence between a male and a female.

Once again, her place is not in the kitchen. This doesn't mean she has to neglect her responsibilities when she gets married like some feminists think. Women have their responsibilities so do men. Women should not be left to do the house chores and take care of the kids all alone after a tiresome day at work.

Why can't the man give her a helping hand after all she is not machine. Even machines break down at some point. I repeat, women are not slaves. With women occupying high ranks in the society,they should be in the best position to empower other women and not to abuse the power they have or to neglect others or even treat their fellow women who find themselves in the lower rank with little or no respect.

How do you empower that "Waakye" seller or "Koko" seller or even the hawker on the street with no educational background. How will you make that young girl in the village understand that doing house chores is not all that there is to life and that she could also be in a better position one day to help her fellow ladies who are ignorant of this notion as she once was.

Feminism has to do with the movement which argues that legal and social restrictions on women should be removed in order to bring about equality of the sexes while empowering women has to do with granting women the political,social or economic power to support other women to discover and claim personal power to break the legal and social restrictions on women and bring equality of both sexes.

What makes you and I feminists is the fact we believe in bringing about the equality of the sexes in all aspects of public and private life.

Women around the world need to know that they can attain whatever height there is without having to sleep with men.

No,you don't have to sleep with a man to get that job, neither do you have to go to bed with a man to be awarded that contract or get a promotion.The question is "why women?". Women may be soft hearted but definitely not weak. It's high time we broke that cycle. Women are not sex toys or slaves and we shouldn't make men believe so. We are filled with much dignity and integrity that should not go down the drain.

We can not allow men take advantage of us . We deserve better. I crave your indulgence to join me make this world a better place for women to dwell in. Let's help create the awareness to enforce gender equality. Let's help educate the girl child. Remember,a strong woman is one who doesn't bring other women down,rather empowers them. Yes we can.