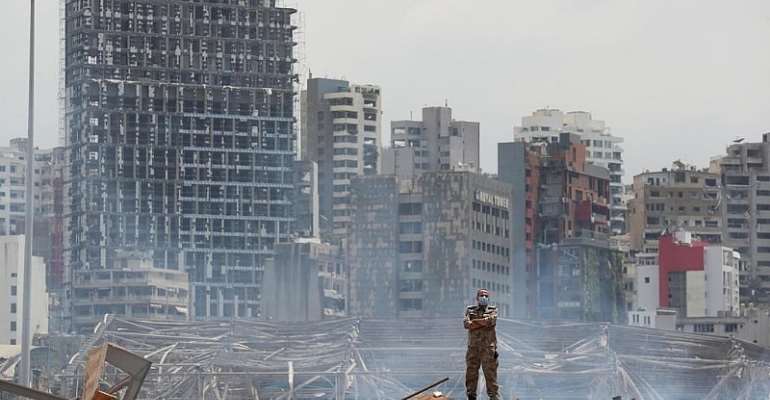 As rescuers continue to search the rubble for survivors of Tuesday's double explosion in Beirut, Lebanese President Michel Aoun has rejected calls for a global investigation, saying such a probe would "dilute the truth".

Lebanon's president rejected any international probe into the catastrophic Beirut port blast, saying a missile or negligence could have been responsible for Tuesday's explosion, which killed at least 154 people and devastated swathes of the capital.

The entrenched Lebanese ruling class has come under fire once again since the blast.

A political system rotten to the core

The revelation that a huge shipment of hazardous ammonium nitrate had languished for years in a warehouse in the heart of the capital served as shocking proof to many Lebanese of the rot at the core of their political system.

President Aoun admitted on Friday that the "paralysed" system needed to be "reconsidered".

He pledged "swift justice", but rejected widespread calls for an international probe, telling a reporter he saw it as an attempt to "dilute the truth".

Two possible explanations for the blast

"There are two possible scenarios for what happened: it was either negligence or foreign interference through a missile or bomb," he said, the first time a top Lebanese official raised the possibility that the port had been attacked.

What ignited the massive shipment of the chemical remains unclear -- officials have said work had recently begun on repairs to the warehouse, while others suspected fireworks stored either in the same place or nearby.

Near the site of the explosion, by the carcass of the port's giant grain silos, rescue teams from France, Russia, Germany, Italy and other countries continue their search efforts.

The World Food Programme has promised to help affected families and has offered wheat imports to replace lost stocks from the silos. US President Donald Trump said he would join other leaders in a conference call Sunday to discuss coordinating international aid.

Four bodies were uncovered near the port's control room Friday, where a significant number of people were believed to have been working at the time of the blast.

No one has been found alive.