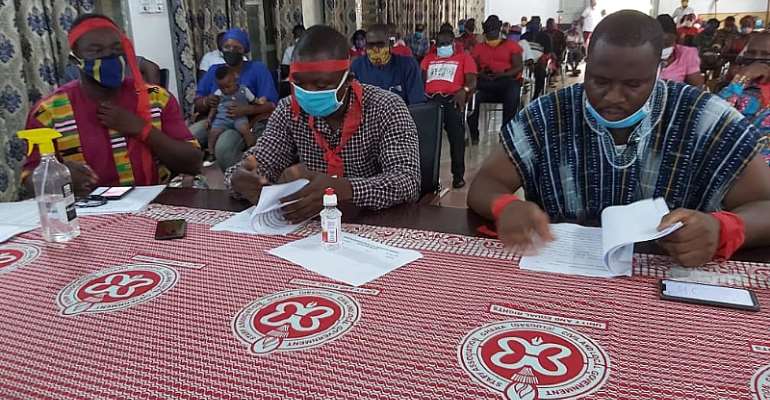 Members of the Civil and Local Government Staff Association (CLOGSAG) in the Kassena-Nankana Municipality OF the Upper East Region are unhappy with the deduction of GHS30 from their salaries.

According to them, they have been told that the amount is being deducted as part of their regional welfare scheme.

The CLOGSAG members have given the Upper East Regional Secretariat of the association a one-week ultimatum to stop the Controller and Accountant General's Department from continuing with the deductions or incur their wrath.

According to the group, they unanimously rejected the Upper East Regional CLOGSAG welfare scheme at a meeting on July 7, 2020, and wondered why the Controller and Accountant General's Department will be deducting the amount from their salaries without their consent.

The group described the action of the Upper East Regional Secretariat of CLOGSAG as a breach of contract and an affront to the rights of employees.

Speaking at a press conference in Navrongo, spokesperson for the group, Mr. Abel Akumbuno, said, the members are demanding immediate reimbursement of their funds.

They also ordered the National Secretariat of CLOSAG to resolve the matter within two weeks or risk withdrawal of membership to other unions.

“We are demanding an immediate reimbursement of our funds with compensation of 15% by the 15th of August 2020 and failure to do so shall lead us to the withdrawal of our membership from the union and seek redress from relevant quarters”.

“We are giving the Upper East Regional SCLOGSAG Secretariat one week to engage the Controller and Accountant General's Department to stop the deductions and take our names off the Upper East Welfare Scheme. If after one week, no action is taken on this matter, we shall seek redress from the courts. We are also giving the National CLOGSAG Secretariat two weeks (Tuesday, August 11, 2020) ultimatum to act on this matter or else we shall withdraw our membership from CLOGSAG and join TUC or form a new union”.

Mr. Akumbuno, accused the regional CLOGSAG secretariat of failing to provide members with personal protective equipment in the wake of COVID-19 as unfortunate.

Some Ghanaians in UK embark on walk to show support to Akufo...
59 minutes ago

Young Oswald whose ‘Our Day’ wishlist went viral dreams to b...
59 minutes ago