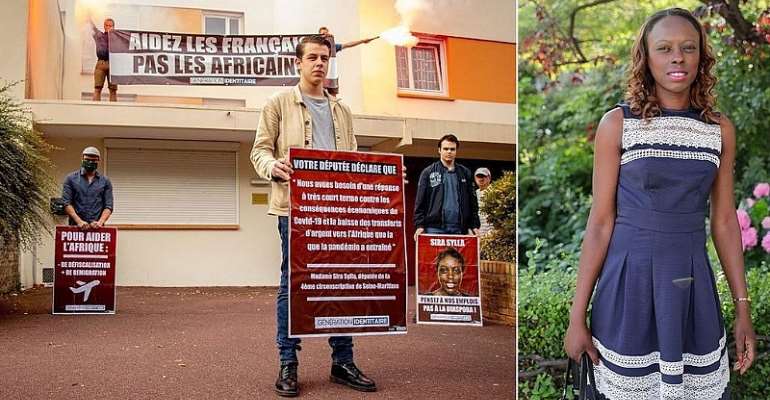 French Prime Minister Jean Castex and Interior Minister Gérald Darmanin have expressed their support for ruling party MP Sira Sylla, following an anti-immigration protest linked to her proposal to reduce tax on the transfer of money to Africa.

Sylla tweeted a photo of 5 protesters from the far-right anti-immigrant group Génération Identitaire, demonstrating in front of her constituency office at the weekend with signs saying, “Help French people, not Africans” and “Think about our jobs, not about the African diaspora”.

She replied: “You will never hurt me. I am proud of the work I have been doing with conviction over the past three years as an MP for the French Republic, particularly for my constituency and for the relationship between Africa and France. More determined than ever."

In July, Sylla proposed a bill in parliament allowing temporary tax relief on the commission paid on money transfers to African countries, in a bid to help with the economic consequences on the continent of Covid-19.

Interior Minister Gérald Darmanin also condemned the protests, expressing his “total support” for the MP. “The Republic will never give in to the hate ideology of these extremist groups”, he affirmed.

Since the beginning of the Covid epidemic Africans living in France have been earning less money and so sending less to family members in Africa.

Transfers of money from individuals living in France to family members in Africa are estimated to be three times the sum paid from the French public purse to these countries.

Sylla noted in an interview with RFI in May that the money transfers are a direct, concrete way of helping people in these countries. “We know where the money goes,” she said, hinting that it does not disappear through corruption or bureaucracy but reaches those in need.

At the moment, a commission of between 8-10 percent has to be paid by the sender.

Sylla wants that commission to be deducted from annual revenue when the sender fills in his or her yearly tax returns, so that no tax is paid on it.

The measure would be in place only temporarily, as a response to the Covid-19 crisis.

Sylla is president of the French parliament's France-Rwanda-Burundi friendship group.