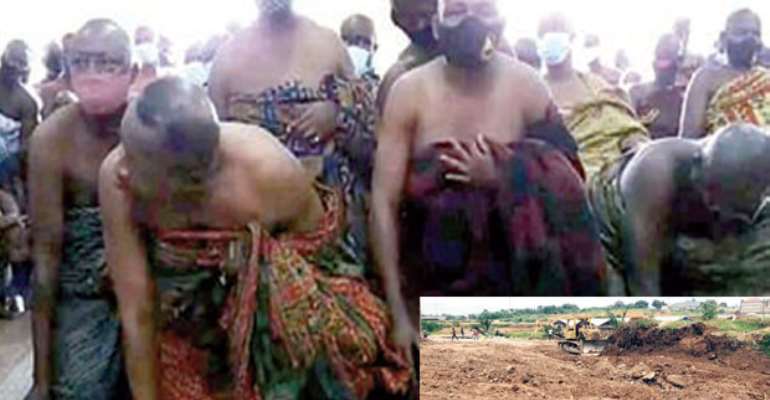 The whole building containing a number of shops belonging to the Bantamahene, Baffuor Asare Owusu Amankwatia, has been demolished.

The shops were fast springing up at the Race Course in Kumasi.

The demolishing exercise happened barely 48 hours after the Asantehene, Otumfuo Osei Tutu II, reprimanded the Bantamahene for illegally building at the Race Course.

When DAILY GUIDE visited the Race Course on Thursday afternoon, excavators and bulldozers were dismantling the Bantamahene's building project which had reached the roofing level already.

The paper gathered that the demolishing exercise was carried out by officials of the Kumasi Metropolitan Assembly (KMA) who were acting on the strict orders of the Asante King.

Few days ago, during a meeting at the Manhyia Palace chaired by Otumfuo, it emerged that the Bantamahene had diverted the course of the sacred Subin River by filling it with sand.

According to reports, Baffuor Owusu Amankwatia, known in private circles as Sylvester Asare Owusu, a former Chief Executive Officer of Kumasi Asante Kotoko Footbal Club, had used a contractor to block the sacred river just to pave the way for him to construct shops and lease them out to traders for his personal benefit.

This revelation quickly angered Otumfuo Osei Tutu II, who in the presence of the other chiefs, lambasted the Bantamahene for stooping so low to indulge in an illegality at the Race Course.

The Asantehene bemoaned the fact that Bantamahene, who is the warrior of Asanteman, ideally should know better but chose to engage in such a sacrilege.

Baffuor Owusu Amankwatia, who is the head of the Kontire Division, sensing danger that Otumfuo might destool him for his 'illegal' action, quickly went on his knees and begged Otumfuo for pardon.

The entire Kontire Division also joined their leader by also going on their knees, pleading with a visibly angry-looking Otumfuo Osei Tutu II to tamper justice with mercy and spare the Bantamahene.

Majority of the chiefs that were present at the traditional meeting also begged the Asantehene to spare the Bantamahene. Otumfuo eventually accepted the pleas and spared the Bantamahene.

However, the Asantehene ordered that all structures that the Bantamaahene was putting up at the Race Course, which were adversely affecting the Subin River, be demolished by the KMA immediately.