Mali: Protest leaders have been released but Bamako remains tense 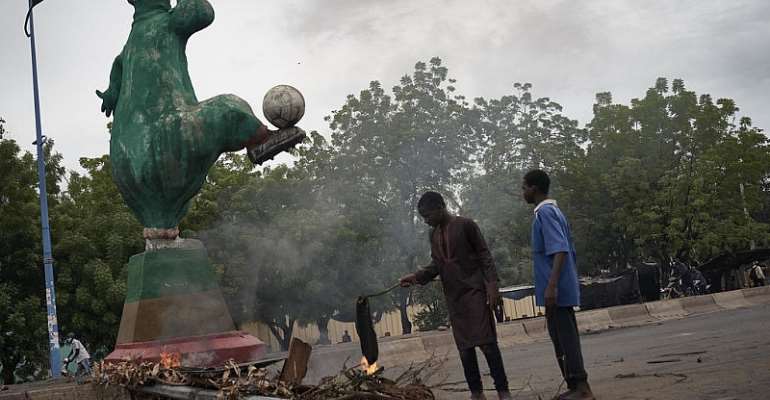 Authorities in Mali released a number of opposition leaders on Monday in a move to try and appease a protest movement calling for the resignation of President Ibrahim Boubacar Keïta.

Lawyer Alifa Habib Kone said three of his clients were released - Choguel Maïga, Kaou Djim and Imam Oumarou Diarra, according to the AFP news agency, reporting that others had been released on Sunday night.

Some 20 opposition figures had been jailed following unrest in Bamako on Friday – a peaceful rally turned violent with some demonstrators blocking bridges, attacking the state broadcaster and targeting the parliament.

Gunfire was heard on Monday in the Badalabougou neighbourhood of Bamako, the home of Imam Mahmoud Dicko, one of the leading opposition leaders.

The 5 June movement has organised recent demonstrations and draws support from Malians fed up with economic problems, allegations of government corruption and the ongoing fight against jihadists.

Rights group Amnesty International said 11 people have been killed in these latest protests and at least 80 injured.

A joint statement by the Ecowas regional bloc, African Union, EU and UN said they were “very concerned about the evolution of the socio-political situation in Mali”.

“They regret that public buildings have been targeted by violence, which has resulted in a loss of life, a number of injured and destruction of property, owned by the state and individuals,” said the statement published on Sunday.

"They condemn forcefully all forms of violence as a means of settling the socio-political crisis," it added.

The statement urged President Keita to create the conditions for political dialogue, notably by releasing the jailed leaders of the M5-RFP group, a coalition of religious, political and civil society leaders steering the protests.

Amnesty International said the Malian authorities must immediately investigate the circumstances surrounding the deaths of 11 people, including a minor aged 15, during the weekend's protests.

“They must uphold their constitutional and international obligations in terms of respecting the freedom of peaceful assembly, forbidding the use of excessive force,” said Samira Daoud, Amnesty's director for west and central Africa.

In response to the protests, Keita has offered to dissolve the country's constitutional court, however, this has been judged insufficient by the M5-RFP group.

Keita's son, Karim Keita, has also reportedly stepped down as head of the parliamentary committee on defence, according to Bamako correspondent Serge Daniel. Karim Keita was previously at the centre of a storm on social media over a video that emerged of him partying.

Internet shutdown
A clampdown on internet services in Mali continued on Monday, with restrictions hitting most, but not all users on social media and messaging apps, according to an internet access watchdog.

“Findings are consistent with previous restrictions in Mali and there is no indication of a technical fault,” said the civil society group, which campaigns for an open internet.

The clampdown targeted the mobile telephone networks and varied according to the area or locality, according to Fatouma Harber, a blogger and activist.

“In certain parts of Mali, like Geo, it's a shutdown, pure and simple, but in other places, especially Bamako, it's restrictions mostly on the mobile networks Orange and Malitel,” Harber told RFI's Kpénahi Traoré.

“We see that it's the social networks that suffer from restrictions, quite simply because it's the most important channel young Malians use to communicate,” Harber added, noting the crippling effect to WhatsApp and Facebook in particular.

The authorities in Bamako previously clamped down on internet access in August 2018 during the runoff for the presidential elections.