Could Harm Reduction Win the Fight on Drugs? 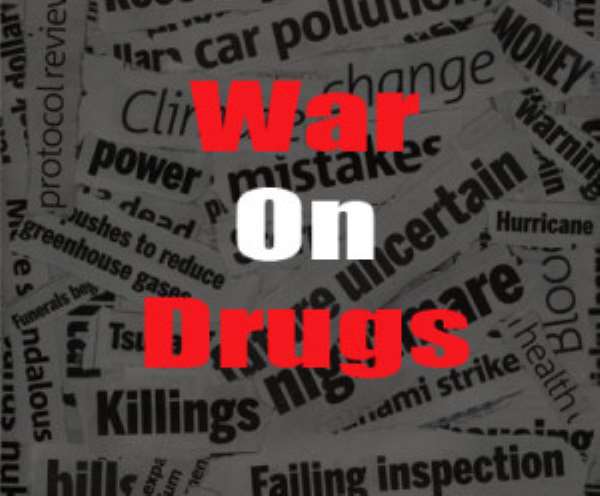 The world as we know it has been fighting against drug use since the 80s. In all of all this endeavour one thing remains constant: the international community and individual states and nations have out rightly condemned drug users and drug use by subjecting drug users to mandatory urine tests; the criminalization of persons who use drugs; the denial of harm reduction services; and, the discrimination of drug users.1 This failure in drug policies and laws simply exacerbates stigma and discrimination and encourages the creation of black markets and the strong urge to defy social norms. Hence, there is the need to explore innovative, pragmatic ways of dealing with drug use. Besides, it is only a FOOL who does the same thing over and over again yet expecting a different result. Going hardcore on drug use has clearly not been successful hence, this is the time to rethink and adopt new measures like Harm Reduction.

Before I delve into the nuances and dynamics of Harm Reduction and its potential to win the fight on drugs, it is prudent to understand some basic concepts and grasp some basic fact about drug use. Drugs are psychoactive substances that when taken have an effect on the mind and consciousness. In that sense it means drugs can be both beneficial and harmful simultaneously. Drugs are used to improve a state of mind, serve as a social ritual and for some religious purposes or as passage of life. It also creates or stimulates pleasure which is very good; however, this can also cause psychological and physiological dependency. This is where the society begins to talk about it – when they see drug users being dependent on it. Mainly, the society’s concern is with what has been branded as illicit by the international community including heroin, cocaine, etc.

It is estimated that globally, on an annual basis, about 250 million people use illicit drugs, i.e., 1 in 20 people (including the use of cannabis and opoid).2 Despite the seemingly worrying number, statistics shows that majority of drug users (90%) will be beneficial and non-problematic (this is irrespective of whether the drug is illicit or legal). Given these facts, it raises concerns as to whether the current stringent laws and policies are indeed the right ways to deal with the drug issue. This is where the concept of Harm Reduction comes in.

Harm Reduction simply refers to policies, programmes and practices that aim to minimize negative health, social and legal impacts associated with drug use, drug policies and drug laws.1 The import of this strategy is rooted in the principles of social justice, respect for human rights, avoiding stigma and cooperating with networks of people who use drugs. We know that using unsterilized needles can lead to the contraction of HIV and HPV yet drug users do it. Criminalizing such issues does not solve the problem. What if we could simply regulate what they do to minimize the harm they are likely to face when not supervised? This is what Harm Reduction seeks to attain.

Harm Reduction centres on the inclusion of drug users into the society to eradicate marginalization of such groups, increase their trust in the health system and social welfare, and develop the volition form positive behaviours of social acceptability. This is the essence of Harm Reduction. For years, the narrative has been that government can control every aspect of the drug use continuum, but this is a BIG MISPERCEPTION. Governments and narcotic authorities have zero control over the demand and supply of drugs, the prices of drugs, the quality of the drugs used, etc. It is anecdotal that using contaminated heroin or cannabis can be more detrimental to the health and wellbeing of the user and can even lead to death. In most cases, these stringent drug policies forces individuals into a web of crime just to be able to get quality drugs for their perceived benefits. Therefore, employing Harm Reduction can help to regulate this more effectively and efficiently and minimize any possible risks or harm that may emanate from this intervention.

Practically, there are a lot that can be done with respect of Harm Reduction. The most common method is the incorporation of Harm Reduction into intervention programmes. For instance, it is known that the use of unsterilized needles for injecting drugs can increase likelihood for HIV. Therefore, what Harm Reduction will do is to provide drug users with clean needles as well as accurate education about the need to avoid sharing needles to inject drugs. This will empower users to use drugs the right way and reduce if not eliminate the likelihood for contracting HIV from an infected needle. Again, there can be interventions to ensure that pharmaceutically pure drugs like methadone are used. This will ensure that drug users avoid criminal activities in order to get the right stuff. Also, massive outreach work is another way of ensuring harm reduction. As stated earlier, Harm Reduction seeks to minimize the negative effects of drug use. This fundamentally starts with controlling problematic and dependence drug use. Therefore, outreaches are quintessential in educating and providing drug users with the opportunity to make informed choices in order to minimize harm.

In essence, Harm Reduction is effective and saves life. It is an evidence-based approach to reducing the spread of HIV in drug injecting users. Therefore, I conclude that governments around the world can follow the WHO’s Harm Reduction protocols for drug use by adopting Opioid Substituting Therapy (OST) and Needle and Syringe Programmes (NSPs). There will also be the need to revise drug control policies across the globe to incorporate Harm Reduction tools. Additionally, health providers, as well as social workers and psychologists, would have to be re-oriented and their capacity honed to understand and deliver Harm Reduction interventions without prejudice. When countries adopt this method in the fight against drugs, we will be able to reduce several health events.

Harm Reduction is the new paradigm for winning the fight on drugs.