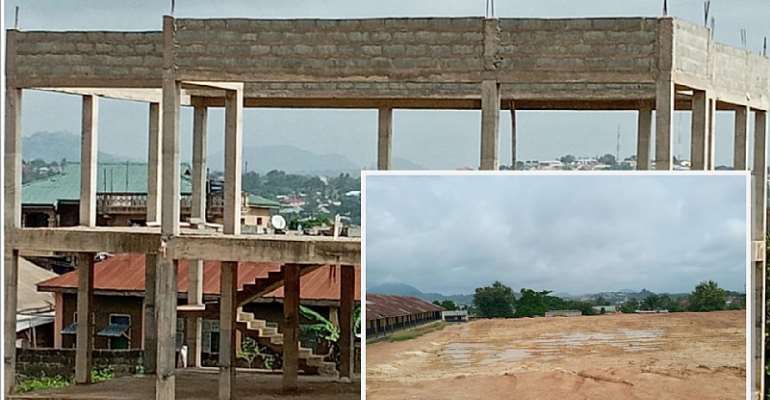 Some residents of Nsawam Adoagyiri Municipality in the Eastern Region have lamented what they say is the low level of development in the area.

From market women, commercial vehicle operators to the youth in the area, they say the Municipal Assembly and the Member of Parliament for the area, Frank Annoh Dompreh, should do more to accelerate the pace of development in the municipality.

Speaking to the media, some market women said while the Municipal Assembly does not seem to care about their plight, especially in the midst of Covid-19, some of its officials have also been extorting money from them in the name of ‘market tolls and tent fees’.

The women say, as part of measures to contain the spread of the novel coronavirus pandemic in the area and to ensure social distancing, the Assembly moved them to a school field to ply their trade, alleging that some officials have been extorting money from them.

“They have brought us here and every three days they come to charge us some GHC20 or more as tent fees. That is minus the daily market tolls we pay. We also pay for these plastic chairs that we are using,” one woman lamented.

Some taxi drivers and okada operators particularly bemoaned the bad nature of some roads in the area. They appealed to the MP for the area, Annor Dompreh, to ensure that work starts on the roads, including the Nsawam-Pakro road, after recently cutting sod for construction works to begin.

“The road linking suburbs of the constituency are in a deplorable state. Large potholes have now taken the position of asphalt on our roads. This is generating a lot of problems for our drivers and passengers,” one Osei Prince Freeman, a youth activist in the area, lamented.

He also complained about abandoned AstroTurf projects ongoing in the area.

The AstroTurf project, part of the government’s ‘One Million dollar per Constituency’ program, was to address sporting issues in the area. “These fields are now the breeding grounds for mosquitoes as we speak now. There is no support for our sportsmen and sportswomen in the constituency, to say a few,” Freeman said.

For his part, Asamoh Prince, another youth activist, lamented about a library project that has been abandoned since 2017. He also spoke about the health facility in the town, saying “the outbreak of COVID-19 has exposed the weakness of the health system.”

“As of now, there is just one isolation centre to quarantine COVID-19 patients. This was even provided by an NGO and not by the government,” he stated.

The youth also complained about the high level of unemployment in the area. “The constituency used to have a litany of factories but what do we see now? Most of these factories are either out of operation or have collapsed. In fact, there are many school leavers without jobs in the constituency,” Asamoah stated.

The youth further stated that even though the constituency hosts the largest medium prison in the country, they do not benefit from it.

They are therefore pleading with the political leadership of the area to help them get recruited into the Ghana Prisons Service.

“The Nsawam-Adoagyiri constituency has shown its loyalty to the NPP since its inception. Therefore it should be rewarded as such for the youth to be proud of their background. We are pleading with the NPP delegates who will be voting in the Saturday primaries that if for eight years, Annoh Dompreh cannot help us, then they should change him” they added,” they said.