June 4 Was a Nuisance Both then and in Retrospect 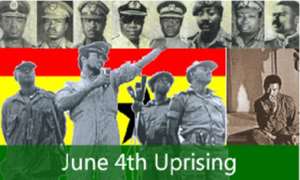 It is not clear what the leader of the erstwhile junta of the so-called Armed Forces Revolutionary Council (AFRC), Chairman Jerry John Rawlings, means when the then promotion-stuck and frustrated Flight-Lieutenant of the Ghana Airforce (GA) bitterly complains, 41 years on, that the intellectuals and socialists of the present establishment of the country’s main opposition National Democratic Congress (NDC) have been a great letdown, when it comes to the standard narrative of the June 4, 1979 Revolution which, by the way, was not really a “revolution” in the practical or traditional sense of the term, but rather a veritable uprising by some junior-rank members of the Ghana Armed Forces (GAF) against members of the so-called Supreme Military Council (SMC) junta, then led by the summarily executed Lieutenant-General FWK Akuffo (See “NDC Intellectuals, Socialists Have Been a ‘Real Let Down’[sic] – Rawlings” Modernghana.com 6/4/20).

I have stated before several times, in quite a slew of my previous columns, and hereby repeat the same, by, once again, emphatically observing that the June 4, 1979 putsch was only incidentally and/or accidentally a “revolution.” It was inescapably and veritably the first successful attempt by junior-rank members of the Ghana Armed Forces aiming to get a shot and their turn at plundering the resources of the country just like their institutional and professional superiors, since the apocalyptic failure of the Lieutenants Yeboah and Arthur-led coup attempt dubbed “Guitar Boy,” or some such label, that resulted in the shooting death of Lieutenant-General Emmanuel Kwasi Kotoka. The Rawlings-led 1979 AFRC putsch was also successful primarily because there had recently been an internal power struggle among the top-echelon membership of the GAF, that had barely the year before, that is, in 1978, resulted in the “Palace Coup” that saw the original leader of the Supreme Military Council junta (SMC-1), led by General Ignatius Kutu Acheampong, removed from office and promptly put under house arrest.

Not only that, General Acheampong, who had mischievously attempted to extend his “Benign Military Dictatorship” by the establishment of an Nkrumah-style “Union Government,” had also been thoroughly and effectively stripped of all his military honors and titles. This is what the Rawlings/Boakye-Djan Abongo Boys have suavely but patently and inauthentically fabricated into what they now conveniently and opportunistically term as the senior-rank membership of the Ghana Armed Forces’ having brought the name and image of the GAF into abject disrepute. Fundamentally, these two khaki-wearing savages could only be distinguished by the level and extent of their greed and the ferocity with which they attended the same. You see, as kleptocratic as the Acheampong-Akuffo Posse could legitimately be so described or tagged, the idea of shamelessly cannibalizing state-owned real-estate property was nearly exclusively introduced in our junta political culture by Chairman Jerry John Rawlings and his uniformed robber-barons and such civilian associates and cronies as the Ebo Tawiahs and the scandalously grubby Ahwoi Brothers, among a platoon of other state-protected thieves.

What was more, the head of the reconstituted Supreme Military Council (SMC-2), General Akuffo, had just lifted the official ban on political-party activities that had been in effect since January 13, 1972, when the Colonel, later General, IK Acheampong-led junta of the National Redemption Council (NRC) had overthrown the Dr. Kofi Abrefa Busia-led democratically elected Progress Party (PP). By the eve of June 4, when the Rawlings/Boakye-Djan Posse struck, the Akuffo-led SMC-2 junta was already far in advance of its salutary preparation of handing over power to a democratically elected leader, as political parties were already campaigning for a general election to be held in a couple of months. Among the most significant of such political parties were the Dr. Hilla “Babini” Limann-led People’s National Party (PNP), the Victor Owusu-led Popular-Front Party (PFP), the William “Paa Willie” Ofori-Atta-led United National Convention (UNC), and the Colonel Frank George Bernasko-led Action Congress Party (ACP).

In short, the national security apparatus was not as strong or fortified as it would have been if the Akuffo-led SMC-2 junta had not been preparing to hand over power to a democratically elected civilian government. In sum, there was absolutely nothing essentially or fundamentally heroic about the June 4, 1979 Uprising. Indeed, it has even been speculated that had the same coup d’état been so amateurishly staged in neighboring Nigeria, with a far bigger and more professionally formidable Armed Forces, the ragtag Rawlings/Boakye-Djan Posse would readily and brutally have been made minced meat of. You see, June 4 was not necessarily about the extirpation or the radical uprooting of rank corruption in government, as Chairman Rawlings would have the so-called intellectuals and socialists among the kleptocratic ranks of the National Democratic Congress interpret and narrate.

And, by the way, absolutely no seasoned major intellectuals and/or scholars or senior professors or lecturers at any of Ghana’s then three public universities actively participated or supported the so-called June 4 Revolution. It was largely junior level and “rising-star” lecturers like Drs. Obed Yao Asamoah, Kofi Awoonor, late, Kwesi Botchwey and Mr. Tsatsu Tsikata and one or two of the Ahwoi Brothers that constituted the intellectual vanguard of the AFRC and later the Provisional National Defense Council (PNDC) brain trust, as it were. to be certain, a critical review of the socioeconomic policies of the AFRC junta clearly indicates that the 15 barely formally educated soldiers who constituted this Rawlings-led junta cabinet had, at best, only a marginal appreciation and/or knowledge of how a viable national economic apparatus operated.

Which was why these decidedly political greenhorns inadvisably adopted the inescapably jejune economic policy of the faux-socialist so-called Controlled Pricing System, which forced the prices of the so-called Essential Commodities – largely imported consumable items like rice, canned milk and sardines and toothpaste – to be sold by traders well below the going market prices, with absolutely no practical and/or professional sense of regard for the basic economic principle of Demand and Supply. It is crystal clear that Chairman Rawlings, 41 years on, still has little appetite for the hard truth or true narrative or story of the so-called June 4 Revolution. It was this wanton and criminal destruction of Ghana’s economy that effectively ensured that the far more realistic and comparatively sophisticated economic policies implemented by the Limann-led People’s National Party would be a grinding and/or apocalyptic failure.

The author has 5283 publications published on Modern Ghana.