Those who invent war end up becoming casualties: Karma is no bitch! 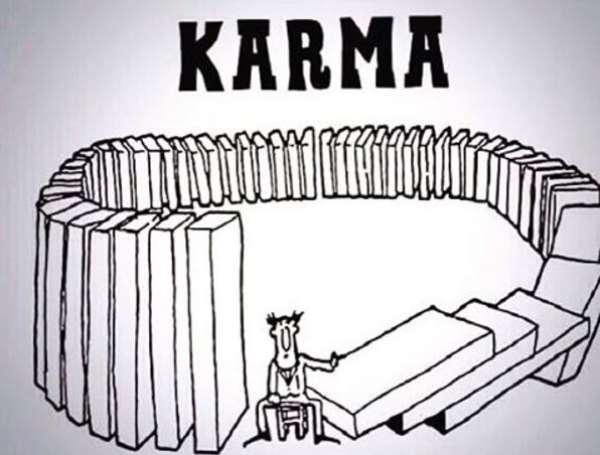 I have scanned through the world of history for some time and at this point, I can state without any shred of doubt on my mind that nobody goes against the will of the people and gets away with it and there's nothing more scary than the "anger of the people". Between 2017-2018, the civil unrest that erupted Togo against 50 years of dictatorial rule of father-son combination of Gnassingbe Eyadema and Faure Gnassingbe lends much credence to my claims...the snapshots of angry women disarming armed military men in uniforms with bare hands demonstrated the extent the people can go against the iron gates of oppression when the need arises.

Let me tell you a bit about Germany in the early 90's when the Nazis overpowered communism and solely seized power. The Hitler inspired Nazi became the world most notorious criminals who ruled over Germany for years. Hitler became God in the days of the Nazis and armed with terror, fear and intimidations nobody could even point a finger at him but when the people became fed up with the excesses of the Nazis, what happened to each one of them including Hitler himself whose where about is unknown till date remains a big lesson inside the dark pages of history for persons who desire to make similar pursuit.... history is always generous enough to devote you a page .. but your actions will determine what to be filled in those pages ...

Fed up with the excesses of Nazi criminal orchestrations, the people cried for help and as usual, America, The Soviet responded leading to the sad end of Adolf Hitler (the most notorious dictator the world has ever seen ) aftermath the crush, all top-notch Nazi criminals fled and Argentina became the safe haven for most but my question is ...why did they run? these were men of power, they had bunkers, armies, money, etc but couldn't stay ... the anger of the people is more powerful than anything that's if you dare ask for it. In the end, thanks to the Israeli Secret Service, the Mossad, each one of these Nazi criminals was hunted and killed like a dog... some in the streets, some were shipped to Israel like shitloads of items and murdered to avenge the death of million Jews Hitler and his gang slaughtered.....

What I'm seeking to tell you here is ; you can never invent war or create a chaotic scene and expect to live in peace, never, the world doesn't work like that and as l always say,." if you kill to get you will definitely get killed if you decide to keep" karma is no bitch !

Fresh on our minds is Mugabe's Zimbabwe, When the people of Zimbabwe became fed up with the dictatorial stunts of Robert Mugabe..a dying man who continued to clinge to power because of greed despite his failing health...Mugabe in his later days was a very sick man but was ably kept in power by the support of few greedy idiots but when the street screamed "enough is enough" , it took few hours for decades of dictatorial rule to crumble ....never underestimate the power of the people!

I gave these backgrounds to make a point that ... you cannot use the Might of the State as an instrument of oppression to crackdown on dissents or persons of alternative views and expect to succeed, it doesn't matter how long you hang on to power, the end will always be disastrous.... because when the people rise... nothing can quell their anger, the reason the Electoral Commission of Ghana led by arrogant and disrespectful Jean Mensah who enjoys the tacit approval of the President Nana Addo must be wary of the path they are attempting to use to rob countless number of Ghanaians, their inherent constitutional right to vote ! I told a friend recently that , in Ghana, the right to vote is a sacred privilege conferred on us ( citizens above 18yrs and of sound mind) thanks to article 42 of the 1992 constitution and anyone who tries to take that away is attempting a constitutional putsch and must be stopped! "

I have seen pictures and read reports about Jean Menash, the EC boss storming IPAC meetings with huge army appearing scary like the days El Chapo, the notorious drug kingpin when he was declared wanted by the DEA and the Mexican Marine... why create such needless scene and unnecessary tension considering the political climate we find ourselves in at the moment..... if you decide to dance to the dictates of your shadow bosses and steal the voting rights of citizens, trust me, nobody can protect you from the anger of the people.. the reason I took you on a safe trip into the dark pages of history.

From Global FirePower report, 2018, Ghana has active military personnel of about 13,500 (active means, those who will be readily available for deployment in case of...), the report further ranked Ghana 106 out of 136 countries interms of military strength. It's also a known fact, that Ghana lags far behind UN's benchmark for number of police personnel developing countries are expected of. As of 2014, the GPS was about 30,635, giving a police-population ratio of 1:784

So you can do the additions and if you are the EC boss and you think you can insult, disenfranchise many Ghanaians to satisfy the whims and the conveniences of your pay masters because you have military and police protection, then I can tell you that, you must be very naive, inept and egomaniac...

Currently, the EC is considering the creation of about 33,000 polling Stations, assuming that is even true, because as it stands now, no data is available to Jean Mensah's EC to be used as basis to create polling centres and per the numbers given so far, let me be a bit charitable because we are in 2020, the numbers may change but very slightly and one can still deduce from my analysis that the state cannot even get 2 security personnels at each polling station even if the Fire service and Custom personals are deployed, also remember a significant number of both military and the policemen are outside our jurisdiction doing other national assignments and we cannot afford to leave police stations, checks points, security posts etc unguarded because of a registration exercise.... so if the people say no, you must be reasonable enough to reason with them.

So as someone watching our political infrastructure from a distance not far, my little advice to the belligerent EC boss Mad. Jean Mensah is that, Ghana has come thus far because of consistent consensus and dialogue among political actors and stakeholders and this is no time to deviate from the usual IPAC norm, IPAC is not a war theatre, persons who appear there are persons who have excelled with the brilliance of wit and extensive electoral experience and as a novice who just got there because of some family ties or whatever, she must learn to behave and listen to wisdom.... being a normal EC boss is all Ghanaians seek not an EC boss who is tied to a leash for a comic display on a sensitive political platform like ours.

Jean Mensah cannot continue to parade herself as a mini- electoral celebrity who walks around town in armoured cars, guards her house with nuclear arsenal launch pads and appears before IPAC like Pablo Escobar, enough of the filthy ego tantrums....the people of Ghana are very peaceful people who seek no war or battle, the average Ghanaian is proud of his heritage and cherishes the peace but trust me, a Ghanaian will not sit aloof to be disenfranchised, many will resist oppression of any form or kind and with everything in them as the verse in the National anthem says .".resist the oppressor's rule with all our might" If you go against the people,... even God will refuse to protect you ..Mugabe, Ben Ali, etc are enough ... I'm Ivan and I'm no cynic and this is my infosque.

The author has 47 publications published on ModernGhana.

Stiffer sanctions needed to punish persons who engage in tax...
37 minutes ago