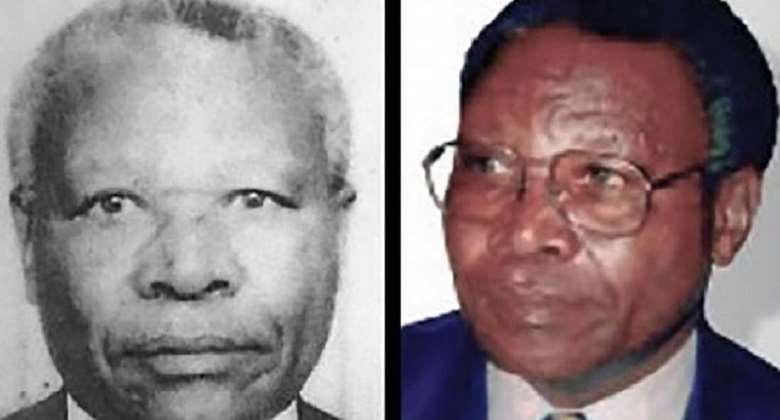 Félicien Kabuga, one of the last key suspects in the Rwandan genocide, lost an appeal on Wednesday to be released under court supervision. French judges have put off a decision on whether to transfer him to an international court until 3 June.

Dressed in slippers, jeans and a purple shirt, Felicien Kabuga appeared before a Paris Court of Appeal on Wednesday, in a wheelchair and clad in a face mask.

One of Rwanda's most notorious fugitives, he listened impassively as the presiding judge read out the seven criminal counts against him, including genocide and incitement to commit genocide against Rwanda's Tutsi minority.

"Those are all lies," Kabuga said finally through an interpreter. "I would not have killed my customers. They are lies."

Kabuga was in court to challenge an extradition bid to transfer him to an international court in Arusha, Tanzania. But French judges refused to release the 84-year-old on bail insisting he was a "flight risk".

Kabuga's lawyer had argued that his client is in poor health.

Most wanted
Suspected of financing the Rwandan genocide, Kabuga was arrested earlier this month in a Paris suburb after 25 years on the run.

According to a statement from French authorities, he was one of the "most wanted fugitives in the world" and the United States had promised a bounty of $5 million for his capture.

"The legal fight is just beginning," says Phil Clark, a lecturer at SOAS University in London and author of the book “Distant Justice.”

Kabuga's lawyers want Kabuga to be tried in France, insisting that he would not receive a fair trial at a UN tribunal.

Legal battle
However for Clark, "the UN has a very strong claim over this case,” he told RFI.

The UN indicted the fugitive suspect in 1997, and Kabuga has been the subject of an arrest warrantfrom the International Mechanism, the body responsible for completing the work of the International Criminal Tribunal for Rwanda, which closed in 2015, ever since.

Clark reckons also that the UN tribunal's chief prosecutor Serge Brammertz, will likely try to push to obtain custody of the last of the ICTR's “big fish” in the wake of Kabuga's arrest.

"He is the strong favorite to become the next Prosecutor of the International Criminal Court. He wants the Kabuga case in The Hague so he can keep his profile high while the ICC selections take place," he said.

Most experts believe that Kabuga will be tried in the Netherlands, but Clark says a legal battle with Rwanda cannot be ruled out.

Rwanda's Eichmann
“There's a real momentum within Rwanda to see Kabuga prosecuted in Kigali, rather than in some distant UN courtroom and possibly in The Hague,” he tells RFI.

“There's a sense that justice needs to be seen as intimately as possible, in many ways it would be like the prosecution of Eichmann in Jerusalem,” he said, referring to the trial of the notorious Nazi after World War II..

Rwanda's High Court Chamber for International Crimes will next week rule in the case of genocide suspect Ladislas Ntaganzwa, who was transferred from the UN's court to Rwanda, in what is expected to be a litmus test of Kigali's capacity to prosecute high profile suspects.

Clark believes that a legal compromise may be reached, which would allow the UN to keep jurisdiction over the Kabuga case, but that the trial would be held in Rwanda.

"Brammertz is going to need lots of help from Rwandan investigators and prosecutors, who played a crucial role in tracking down Kabuga," he said.

Stay in France
Kabuga was arrested from a flat in the suburb of Asnieres-Sur-Seine on 16 May where he was living under a false name. His arrest has raised questions about how he managed to evade the law for over 25 years.

Once one of Rwanda's richest men, Kabuga “benefitted from a lot of protection and complicity,” says Patrick Baudouin, a lawyer and honorary president of the International Federation of Human Rights.

At various times, Kabuga lived in Switzerland, Germany, Belgium, the Democratic Republic of Congo and Kenya, as well as France, police say, although it is unclear when he arrived in Paris.

“We're within our right to question why he wasn't arrested sooner. I think it has a lot to do with French policy at the time, which favoured and protected the government of Juvénal Habyarimana and his entourage,” Baudouin told RFI.

The International Federation of Human Rights has urged the French government to launch an inquiry into why Kabuga was able evade the law in France for so long.

Well-connected
Politically well-connected, Kabuga made his millions out of the tea and coffee industry in Rwanda.

He is alleged to have used his wealth and influence to funnel money to militia groups that massacred at least 800,000 Tutsis and moderate Hutus during the course of 100 days in 1994.

He is accused of supplying the militias weapons, including several hundred thousand machetes imported from China.

The indictment against him also alleges that the radio station he partly owned, Radio-Television Mille Collines, incited the killings of the Tutsis whom it referred to as “cockroaches,” and revealed where they could be found.

Looking for justice
Kabuga's lawyers have hit out at the charges, insisting their client cannot be “presented as one of the main instigators of the genocide when no trial has taken place.”

Some activists took to Twitter to argue that Kabuga should be treated as innocent until proven guilty.

Nonetheless, for lawyer Patrick Baudouin, Kabuga's arrest is an important step towards justice.

“The charges against him are very severe. Even if we can't call him guilty until he's been prosecuted, the fact that someone of his ranking is at last being held accountable, will offer some relief to victims,” he said.

The French court will decide when and where to prosecute Kabuga during its next session on 3 June.