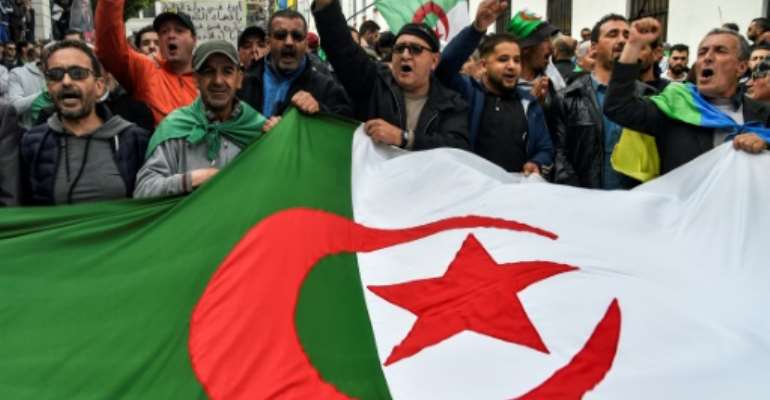 Algeria was rocked by protests from February 2019 until the country was hit by the novel coronavirus early this year. By RYAD KRAMDI (AFP/File)

Algeria said Wednesday it would "immediately" recall its ambassador from France for consultations, after documentaries about the North African country's anti-government protest movement were aired on French public television.

The interior ministry said films, including two broadcast on Tuesday, "seemingly spontaneous and under the pretext of freedom of expression, are in fact attacks on the Algerian people and its institutions" including the army.

Citing the "recurrent character" of such programmes on French public TV, it singled out two documentaries broadcast on Tuesday by France 5 and the former colonial power's Parliamentary Channel.

"Algeria, my love", aired by France 5, sparked fierce debates on social media. It told the story of the country's protest movement through the eyes of five Algerians in their 20s.

Unprecedented mass protests rocked Algeria early last year to demand the departure of veteran president Abdelaziz Bouteflika, sparked by the ailing 82-year-old's announcement that he would stand for a fifth term.

In April 2019 he resigned, and in December, President Abdelmadjid Tebboune was elected on an official turnout of less than 40 percent. Analysts say participation was considerably lower.

Mass protests against the ruling system only halted when the novel coronavirus arrived in Algeria earlier this year.

The second film, "Algeria: the Promises of the Dawn" was broadcast on France's Parliamentary Channel.

In its statement, the Algerian ministry cited what it said were "malicious and lasting intentions on the part of certain circles, which do not wish to see peaceful relations between Algeria and France after 58 years of independence".