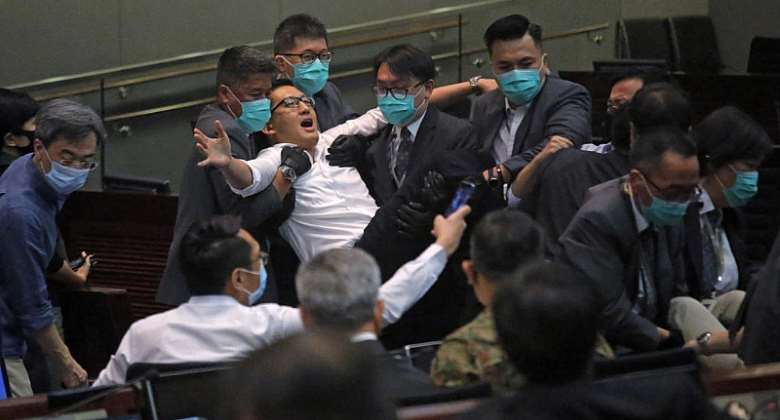 Fighting broke out in Hong Kong's Legislative Council on Monday after a pro-Beijing lawmaker was elected to chair the committee that oversees the presentation of proposed laws. The election ended a protracted struggle for control with pro-democracy council members.

The Legislative Council's House Committee, which vets bills and decides when to present them for a final vote, had been without a chairperson for over six months. The central government in Beijing criticised deputy chairperson and pro-democracy lawmaker Dennis Kwok, founder of the Civic Party, for deliberately delaying matters and causing a backlog of bills to the detriment of public interest.

Kwok was replaced on Friday by Chan Kin-por, who was appointed by the legislature's president to preside over Monday's election. After scuffles and shouting matches, leading to Chan ejecting most of the pro-democracy lawmakers, the election took place with pro-Beijing lawmaker Starry Lee Wai-king winning easily.

Beijing's Xinhua News Agency reported that Lee's election had ended “the prolonged filibusters of the opposition lawmakers led by Dennis Kwok Wing-hang to obstruct the election during 17 meetings since October last year,” noting that “some opposition lawmakers shouted slogans and repeatedly stormed the podium defended by security guards. The meeting was once suspended because of the disturbances.”

The guards subsequently expelled the lawmakers from the ruling council's premises.

National anthem
Lee's election is likely to accelerate the adoption of a controversial bill that would criminalise abuse of the Chinese national anthem.

Hong Kong's chief executive Carrie Lam said last week that passing the bill was a priority for the government, and the bill will be presented to the committee on 27 May.

Within minutes, at least five lawmakers were ejected for disorderly behavior, with at least one lying injured on the ground as the meeting was briefly suspended.

Towards one country, one system?
“Hong Kong is marching towards the beginning of the end of 'one country, two systems',” said pro-democracy lawmaker Claudia Mo Nan-ching after the meeting ended.

The former British colony was returned to China in 1997 under the hybrid one country, two systems framework that formally let Hong Kong retain its own legal system while Beijing takes care of diplomacy and military issues involving the territory.

But in practice, critics say, Beijing has been systematically undermining Hong Kong's autonomy. Mo urged the Hong Kong people to vote out those who “don't care about Hong Kong's future” in legislative elections scheduled for September.

Pro-democracy protest trials continue
Also on Monday, 15 pro-democracy figures, including media tycoon Jimmy Lai, appeared in court to face charges relating to anti-government protests last year over a controversial extradition bill that has since been withdrawn.

The bill would have allowed residents of the semi-autonomous Chinese territory to be sent to the mainland to stand trial. Pro-democracy reaction against the proposed legislation sparked months of violent protests.