Ghana's Development Efforts Can Only Be Sustained With Discipline 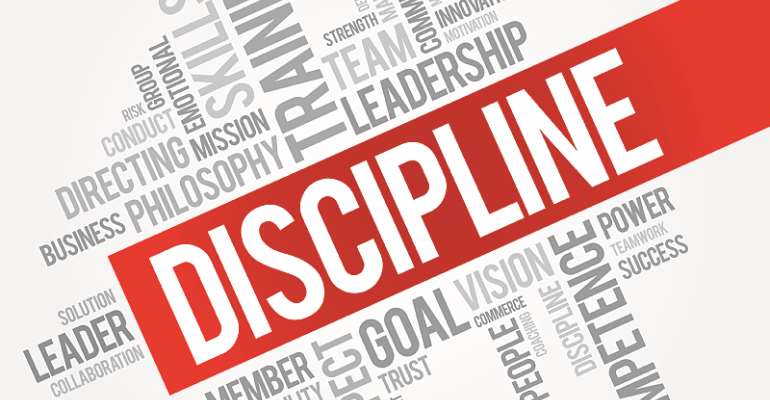 Discipline is at the very heart of the socio-economic and structural development of every nation. No group of people, no society and by extension no country can see any sustainable development if its members or citizens are not disciplined.

It is in order to maintain discipline as a way of facilitating development that every country has a certain form of leadership. And the political leadership, be it clerical, monarchical, democratic or autocratic, also establishes various entities, referred to mostly as Law Enforcement Agencies, and mandates them to maintain law and order. The police and military, often, are the ones at the forefront of this task.

In a 2007 article published on the International Monetary Fund (IMF) website, MS Kumar said, and I agree that "discipline is especially important if countries, industrial as well as developing, are to successfully meet the challenges, and reap the benefits, of economic and financial globalization."

After reading through Kumar's article, and many such authors, I have come to understand why Ghana's development is so slow. Too many people are indisciplined in this country. Too many of us take too many things for granted. Too many Ghanaians behave as if there are no laws and too many law enforcement agencies do not do their job. Sadly, I am beginning to lose hope in Ghana.

As part of directives issued by the president, Nana Akuffo Addo, in his first address on measures to be implemented to mitigate the spread of the deadly Corona Virus Disease (COVID19), okada riders are not supposed to be operating because they and their passengers cannot practice physical distancing. The police have been mandated to enforce this directive, among many others.

It will interest you to know that the police have seized this as an opportunity to make some extra money for themselves. Reports gathered to show that the police are extorting money from okada riders who disobey the rule.

In interviewing some of the okada riders, they express their frustration about how the police officers stop them and demand between GHC200 to GHC300 before letting them go. Hitherto, it was a matter of GHC20 to GHC50. Now, the corruption has more than doubled because those in uniform have been given the authority to 'molest' those in plain clothes. And so, knowing how corrupt the police are, the okada riders also find ways and means of flouting the law without being caught. After all, only the one who is caught is a thief, right?

As I write this article, I just witnessed an interesting incident in which two police officers were chasing Okada riders (commercial motorbikers) at the Kwame Nkrumah Interchange, popularly known as 'Circle', in Accra ostensibly to arrest them for flouting the presidential directive. Funny enough, the two officers of the law were doing this using a motorbike. Both of them were sitting on the same motorbike. Ironically, the law enforcers were using a motorbike to stop motorbike riders from using motorbikes to make earns meet. In short, the police broke the law in order to enforce the law.

In a similar situation, sometime this week, I saw a photo on social media in which two police officers arrested a young man for not wearing a nose mask while he was selling nose masks in traffic. And this case too, the officers themselves were not wearing nose masks.

Walk around Circle and you are bound to see posters plastered on almost all the huge pillars which hold the interchange in place with "Post No Bill" written boldly on them. What beats my understanding is not that right beside those posters are stickers of all kinds and sizes displaying advertisements for churches, political parties and candidates and for other commercial businesses. What bothers me most is the fact that the posters announcing to people to desist from pasting papers and stickers on the pillars are also pasted on the pillars. It means that whoever sought to pass that information on did the exact wrong thing he or she hoped to prevent.

I can go on and on citing examples of the indiscipline in political leadership and its attendant bribery and corruption scandals. A case in point is the recent conviction of three civil servants who pleaded guilty to causing financial loss to the state up to a tune of four million dollars. We can mention how undisciplined prison wardens smuggle drugs and sell to inmates. Don't you wonder how come that prisoners who are supposed to come back into society as reformed people ready to contribute to socio-economic development, come back more criminal and more damaged than they went in?

Somewhere in the middle of 2019, Citi FM and Citi TV launched their "War Against Indiscipline" campaign. It was disgusting to see how people had the effrontery to disobey road traffic regulations right in front of the police and media cameras. There were even instances in which Members of Parliament and Officers of the Customs Unit were caught on camera openly jumping the red light or driving against oncoming traffic or creating their own bypasses, not to go address an emergency, but just because they are men uniform.

Anytime I encounter some of these scenes, I wonder why it is that Ghanaians cannot seem to obey simple rules. Is it in our nature or it is in our nurture? Is it that we are born to disobey or that we are wired to do so? What exactly is the problem with us?

Maybe our problem is one of a lack of stern and focused leadership. Our leaders seem to be more concerned with winning political goodwill from voters and so they are unable to enforce the laws. In order to get the power to syphon our collective monies into their own pockets, leaders allow citizens to be undisciplined. We have leaders in this country who spend time and money arguing about which government was more corrupt or which one borrowed more money from the IMF or the World Bank. Our leaders do not see that making it easy for citizens to obey the right laws is the foundation for any sustainable development project.

It is only in Ghana that you have to pay a bribe to file your tax returns. It is here that you have to pay a bribe to get a fair trial or even a judgement. The system is so discomforting that it seems the only way to do right and to have any respite is to do wrong. If only our leaders would focus their attention on how to make the citizens more comfortable, then, maybe, there would be some discipline in the system and subsequently, some sustainable development.

On the other hand, it is in our own interest, as citizens of this nation, to understand that no matter how uncomfortable being disciplined feels, it is the surest way to see any proper change in our living conditions. And so, it is very critical that we maintain a high level of self-awareness and discipline in our dealings if we want to enjoy a more enabling and conducive environment.

Kwame Nkrumah once said, "Revolutions are brought by men; by men who think as men of action and act as men of thought". To this, I add, that development is brought by citizens who dare to be disciplined.