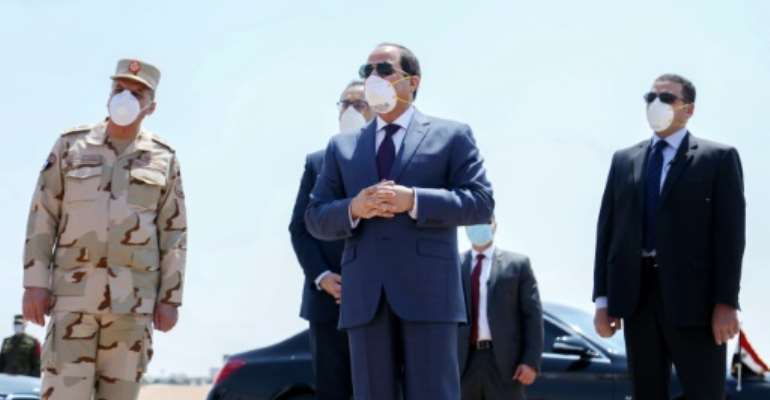 A slickly produced video from the office of Egyptian President Abdel Fattah al-Sisi showed crates of medical supplies -- stamped in English and Arabic with the words "from the Egyptian people to the American people" -- being loaded onto a military cargo plane.

But analysts described these gestures of political goodwill as tokenistic at a time when Egypt's own healthcare system is overstretched.

In March -- before the pandemic had claimed over 296,000 lives -- Egypt's health minister Hala Zayed was the first minister from abroad to visit Beijing since the outbreak began.

Zayed then appeared weeks later in a choreographed trip to Italy, an early European epicentre of the virus, personally delivering masks and gloves to the foreign minister.

Egyptians quickly lampooned her on social media, with one popular joke noting that Sisi was sending Zayed on mercy missions abroad hoping to get rid of her over her handling of the health crisis.

"Health diplomacy has been one of the traditional strategies for global south states who seek to have a more prominent role in the global arena," Gerasimos Tsourapas, a political scientist at the University of Birmingham, told AFP.

"I read this as a short-term strategy that may not be necessarily thought through to the end, given Egypt's growing needs for protective equipment."

Egypt's confirmed COVID-19 cases have reached nearly 10,500 with over 550 fatalities, including nine doctors and six nurses. But some observers say the real toll could be much higher due to low levels of testing.

Last month, Egypt sent the United States a C-130 military plane loaded with medical equipment. It was a striking role reversal for a country which is a leading recipient of American aid, receiving about $1.3 billion annually.

The plane brought 200,000 masks, 48,000 shoe covers and 20,000 surgical caps among other supplies, said Dutch Ruppersberger, a Democrat in the US House of Representatives who heads a bipartisan group promoting relations with Egypt.

"This is why international diplomacy and maintaining relationships with allies like Egypt are essential not in times of crisis, but every day," he wrote on Twitter.

But Yezid Sayigh, an expert on Egypt's military at Carnegie's Middle East Centre in Beirut, suggested the donation reflected the Sisi administration's "special fondness for PR gestures and rhetoric".

Sayigh said the message behind Egypt's global outreach was intended to "buttress its claims about its superior wisdom and capability and its demands for respect domestically".

But such moves were unlikely to have a lasting impact on Egypt's image abroad, Sayigh said.

"What will impress others is success in containing COVID-19 and getting the economy back on its feet," he added.

These friendships have translated into considerable arms purchases, with Egypt ranking third globally in weapons imports.

Last week, the State Department cleared the way for Egypt to refurbish 43 Apache helicopters in a deal worth $2.3 billion.

The military plays an outsized role in Egyptian public life, with activities ranging from building highways and producing Ramadan soap operas to most recently selling personal PPE to citizens.

"Whilst the gesture of sending medical aid abroad was targeted partly at foreign audiences, it was also very much for domestic consumption," said Reem Abou El-Fadl, a political scientist at London University's School of Oriental and African Studies.

All analysts AFP interviewed agreed that the Grand Ethiopian Renaissance Dam played a factor in its latest round of medical diplomacy.

Egypt fears that Ethiopia filling the reservoir of the new dam could reduce the flow of the Nile, upon which it depends for most of its water.

Analysts point to how major Italian and Chinese firms are contracted to build the mega-dam and that Egypt has called upon the Trump administration to sponsor ongoing tri-partite talks with Ethiopia and Sudan.

Abou El-Fadl maintained that "in the recent context of the threat to the Nile waters, we see Sisi reviving Egypt's African diplomacy".

She argued that this carefully manicured diplomacy has ignored the needs of Egyptians, with many hospitals overburdened by the coronavirus.

"Egyptians are acutely aware of the lack of investment in public health amongst other shortcomings of the current administration," she added.