British couple walled into French home by ‘neighbours from hell’ 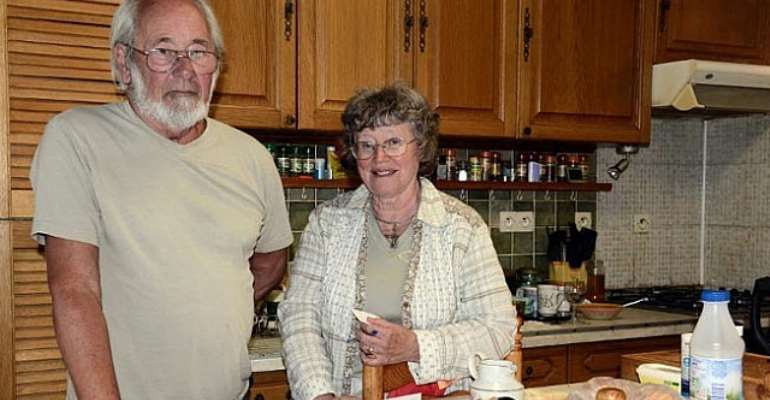 Brugairolles (France) (AFP) – A British couple's dream of a quiet retirement in the sun of southern France turned into a nightmare when their neighbours walled them into their home.

Locals in the village of Brugairolles in the foothills of the Pyrenees were so appalled by the immurement, they rose up to rescue the elderly couple, tearing down a wall from the front of the house and ripping open windows and doors that had been nailed shut.

“We could not accept that they should continue to live under such terror,” declared retired Republican Guard Jeannot Gach, who helped lead the operation to free Faith and John Dyson, both in their 70s, from their home.

The Dysons' tormentors were not jealous locals resentful of outsiders pushing up property prices, but another British couple furious that they had apparently trespassed on a shared lane they claimed to own.

Villagers told AFP their nextdoor neighbours the Dunlops had first blocked the Dysons' front door with a large van before deciding to make their confinement more permanent.

Gach said the Dunlops nailed up their neighbours' window shutters and barred their door with wooden fence posts cemented into the ground, forcing the Dysons to leave by their back garden.

Finally, last week when the Dysons were out shopping, the Dunlops began building a wall reaching up to the second storey of the house.

“They waited for us to go out before they started the bricklaying,” said John Dyson, who is in fragile health.

“Then the whole village united on Monday” to protest against what the Dunlops had done, said Gach, 83, under the watchful eye of local gendarmes. “Everyone came out, and they all shouted and whistled against these awful neighbours.”

“We all waited for the bailiff to arrive to see what they had done,” he added. “After that we took down the wall, unbarred the door and freed the shutters.”

“I cannot find enough words to say” against people like the Dunlops who would try to force their neighbours to “live in total darkness”, he added.

British citizen Robert James Dunlop sits at the wheel of his van in Brugairolles, southwestern Franc …

- 'They were terrorised' -
The village is in the heart of the spectacular Cathar country in the Aude, where ironically there are historical precedents of persecution of this type. The Cathars heretical religious sect was ruthlessly suppressed by the Inquisition in the Middle Age, with hundreds killed by being immured in caves and in their homes.

“The Dysons have been harassed for years but it has got worse since last March,” the village's mayor Alain Labattut said. “They were terrorised,” he told AFP, as a neighbour nodded in agreement.

The Dysons are very popular in the village, which has 258 inhabitants, about 40 of them British. The Dunlops less so, the mayor said, following disputes with other neighbours.

However, Scottish-born Robert Dunlop, 67, who sports a long white beard, has previously claimed to be the victim of three poisoning attempts, complaining at one point to police in Glasgow.

The mayor showed AFP a 14-page letter Dunlop wrote to former French justice minister Rachida Dati claiming three attempts had been made on their lives.

The Dunlops — who remained indoors during the protest by villagers — refused to talk to journalists. Asked by AFP in English if he would like to comment, Dunlop said, “I am deaf, I don't hear what you are saying, I am deaf.”

His Polish-born wife Krystina, who is in her 50s, refused to comment.

Born in South Africa before moving to work in England, the Dysons said they retired to southern France in 2004 to find a little bit of the peace and quiet of their youth in the sun. The Dunlops moved in a year later.

“At the beginning they seemed friendly but then they parked their van at the door,” Dyson said, “and they became nastier and nastier.”