Hot: Obinim Has Called To Beg Me, But I won’t Listen, Let’s Go All Out – Ken Agyapong 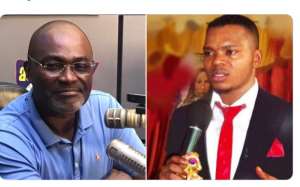 Some few days ago, Hon. Kennedy Agyapong gave an evidence-based expose’ on Bishop Daniel Obinim on Live TV, the Man of God also responded to those allegations leveled against him by the Lawmaker.

Speaking on Oman Fm yesterday, 24/03/2020, the Lawmaker, revealed that he has sent all evidence about all allegations he leveled against Obinim to the Police Headquarters where the IGP and CID boss was present.

He added that the Police got extremely angry when he said in one of his videos that, he is not afraid of the Law.

One of the interesting statements the legislator said, was that One gentleman called Fiifi called him that, he is on a conference call with Obinim and the other three people who wish to apologize to him.

Kennedy Agyapong said there was no way he would listen to the apology because Obinim and his ‘small boys’ have insulted him and what pains him more is the fact that he said he will let people beat him up, nanansem.com can report.

He also gave an update on the Gold -Saga and said one if Obinim’s Fiances have called Adwoa to threaten her.