"a Black Stars Player May Die Of Heart Attack" : 2014 Prophecy 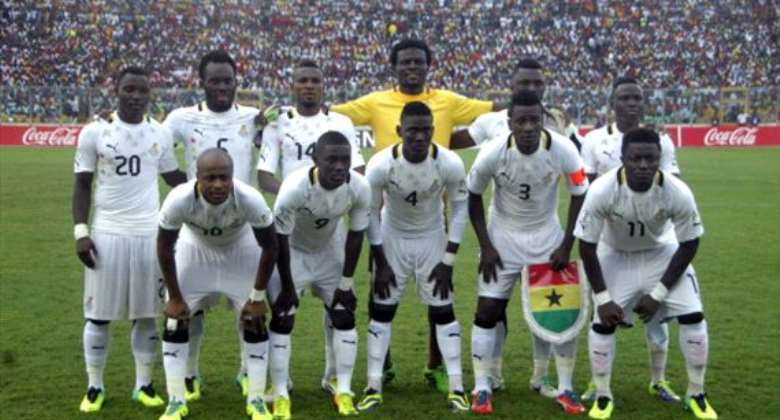 A head pastor of an Accra-New Town based church Mighty Chapel International, Chief Mensah has revealed in his new year message, a health watch alert to all the Ghana Black Stars players as one of them might meet his untimely death if care is not taken. This message is reported by the Leadershipghana online site which we have culled for your perusal.

PREKESE GHANAMEDIA
"There is a spirit of death hovering round the camp of the Ghana Black Stars as a New Year prophecy reveals one of its key players will die through heart attack.

This horrific revelation, according to the Head Pastor of Accra-New Town based Mighty Chapel International, Chief Mensah, would happen at the peak of the team's preparation for the 2014 World Cup championship in Brazil.

In addition, he stressed during the 31st December, 2013 Watch-Night service that the impact would traumatize the entire country.

Again, he hinted there was looming disintegration of the rank and file of the largest opposition New Patriotic Party (NPP) and advocacy by some prominent figures for gay rights legislation in the country this year.

Pastor Chief Mensah said during the service that though the New Year has in stock good fortunes for the nation, in terms of plentiful harvest as a result of more rain, there was also 'bad news' for the year.

He cautioned in prophecy that 'confusion' would disintegrate the NPP, leading to separation of the ranks of the party to form a separatist group with its consequences to disturb the peace of the country.

However, he claimed there would be truce in the protracted confusion among the party members to reach for a common understanding and unity.

The Head Pastor of Mighty Chapel urged all religious believers to pray to sustain the peace in the country as well as to avert the bad prophecy.

He maintained that 2014 is a year of plenty in which many Ghanaians would prosper, explaining that 2013 was a year of burden and therefore, the New Year brings forth rest from burden to restoration and fulfillment."

OUR COMMENTS ON THE BLACK STARS PLAYER'S UNTIMELY DEATH:

It is very important to know that the saying " TO BE FORE WARNED IS TO BE FORE ARMED" sometimes holds water in human in life. The mysteries in not knowing the future makes some of us take the pronouncements by religious experts seriously especially when they have credibility. For us at the PREKESE GHANAMEDIA's office, we are not saying that every Ghanaian should believe in what Chief Mensah is saying but we will like for all the players in the national team to take extra care of their health. It is good to make money but it is also only the healthy body, mind and everything can ca work to bring in the income. We pray that all the players do regular check ups with their doctors to ensure that there is nothing wrong. The role, you the reader can also do is to share the health alert prophecy news with any of the players you know. For those of you who are religious, we believe that it wouldn't be out of tune for you to offer prayers in whatever form for our players.

Yes, Ghana is going to Brazil and we want to win not just participate, this is why we need all our best players on board.

Coming soon, a 2014 Predictions by a world renowned seer with interesting revelations for the year, some of which has already started happening...i.e Heavy Snow in the Tri-States in America, Bombings in Russia etc. Stay tuned.

Hottest Photo Reports
Catch up with all the political quotes from our politicians.
Advertise here
More from Sports
ModernGhana Links
At IMT Hyderabad campus, sports and fitness is a part of routine job.
Ghana Vrs Portual.......the Prophet Has Spoken, And His Prophecies Never Miss
Muhammad Ali My beloved Friends I'm Sorry.
TOP STORIES