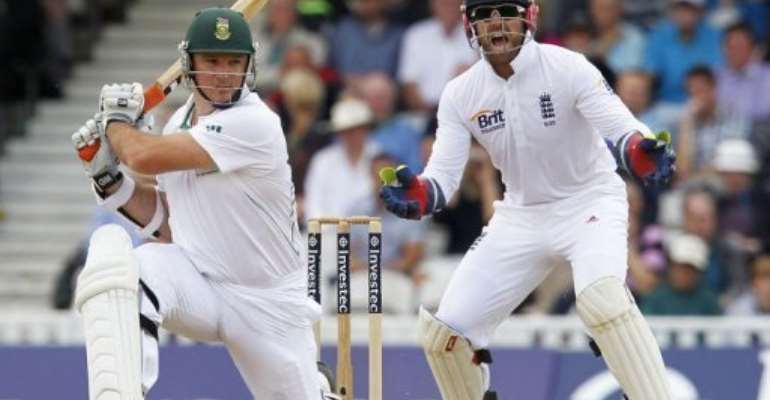 LONDON (AFP) - South Africa captain Graeme Smith hit a century in his 100th Test and Hashim Amla played a marathon innings as the Proteas dominated the third day of the first Test against England at the Oval on Saturday.

South Africa were 403 for two at the close, a lead of 18 runs with eight first innings wickets standing.

Smith (131) and Amla (183 not out) put on a record 259 for the second wicket and there was no respite for the bowlers as Jacques Kallis (82 not out) joined Amla in an unbeaten third wicket stand of 143.

On a slow, dry pitch, offering some variable bounce and turn for the spinners, Smith and Amla dug in and played risk-free cricket to grind down England's bowling attack.

Their partnership was two runs higher than the previous South African second wicket record against England set by Smith and current coach Gary Kirsten at Lord's in 2003.

But South Africa, who will replace England at the top of the world Test rankings if they win this three-match series, did not have things all their own way on Saturday.

Smith and Amla had to work hard in the first hour against the combination of fast bowler James Anderson and off-spinner Graeme Swann.

Smith in particular struggled to score against Swann and was stuck on 48 for almost half an hour before working the spinner to midwicket for three runs to raise the slowest half-century of his Test career.

It took Smith 160 balls to reach his fifty, which came in the last over before the mid-morning drinks break. But the scoring rate picked up markedly, with Swann conceding 21 runs in two overs either side of drinks.

Smith unleashed a flurry of boundaries in the next hour and needed just 41 deliveries to notch his second half-century. He completed his 25th Test century two balls before lunch with a square cut for four off Tim Bresnan.

The left-handed opener then went back into attritional mode after lunch, taking 71 more balls to add 28 runs, including a burst of three fours off successive balls against Stuart Broad, before he was bowled off an inside edge by Bresnan. He had faced 273 deliveries and hit 20 boundaries.

Amla, meanwhile, reached his 15th Test century off 199 balls with 13 fours. Batting with imperturbable calm, he was content to pick off the loose deliveries with sweetly timed drives and wristy flicks to the on side.

By the close he had batted for nine hours and nine minutes, facing 369 balls and hitting 22 fours.

It was his seventh century against England and continued a remarkable run of success in matches in England. He took his total of runs in the country to 1,214 at an average of 75.87. The tally includes five centuries, two of which were double hundreds.

Only Australia's Don Bradman, who scored 2,674 runs in England at 102.84, has a better average among visiting batsmen who have played in 10 or more innings.

Kallis, with a relatively poor record in England, took advantage of the solid foundation laid by Smith and Amla as he moved smoothly to a half-century off 94 balls. By the close he'd faced 161 balls with 10 fours.