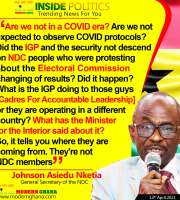 Little is known of the small African kingdoms in the region between the Tano and Volta rivers until the arrival of Europeans in the 15th century. Portuguese navigators, working their way down the west African coast, reach this area in 1471 and build a fortress at Elmina in 1482. But others follow fast. As early as 1492 a French buccaneer, marauding off the coast, deprives a Portuguese ship of its precious cargo.

That cargo is gold, and the Gold Coast becomes the European name for this part of Africa. The trade in gold with the Europeans makes possible the development in the early 17th century of Akwamu, the first African state to control an extensive part of the coast.

During the 18th century the dominance of Akwamu is replaced by that of a much more powerful group, the Ashanti, with their capital inland at Kumasi. By this time the British, Dutch and Danes are the main European traders on this part of the coast, and the most valuable commodity for export is not gold but slaves.

Trading slaves for muskets, among other western commodities, the Ashanti acquire great local power. Their king, the Asantehene, enthroned on a traditional golden stool, holds sway over the entire central region of modern Ghana. But the Ashanti suffer a series of major blows between 1804 and 1814, when the Danes, British and Dutch each in turn outlaw the slave trade.

The resulting tension leads to warfare in the 1820s (with the defeat of a British force in 1824) and again in the 1870s. In 1874 a British army briefly occupies Kumasi.

Meanwhile, in the coastal regions, the British are gradually emerging as the main European power. The Danish fortresses (including the impressive Christiansborg castle in Accra) are bought by the British government in 1850. The last Dutch merchants abandon the coast in 1870. And in 1874 the southern regions are formally proclaimed a British colony, under the name Gold Coast. But it takes another three decades before the Ashanti kingdom, and its dependencies in the north, are finally brought under British

In 1901, taking effect from 1 January 1902, Ashanti is declared a British crown colony. The regions further north become at the same time the Protectorate of the Northern Territories of the Gold Coast.

The colonial years are relatively prosperous and untroubled. At first little is done to involve the African population in the political processes of the colony. But in the years immediately after World War II events move so fast that the Gold Coast becomes the first colony in sub-Saharan Africa to win its independence. The turning point is the return home in 1947 of Kwame Nkrumah after twelve years of study and radical politics in the USA and Britain.

Nkrumah is invited back to the Gold Coast to become general secretary of the United Gold Coast Convention, an organization campaigning for self-government. The UGCC has won the right (in 1946) for an African majority in the colony's legislative assembly, but the fight is now on for a share in executive power.

Nkrumah rapidly extends the movement's popular base, with the result that there are widespread riots in February 1948. The older UGCC leaders are alarmed by this (and by their brief arrest with Nkrumah). A split within the movement leads to Nkrumah founding in June 1949 the Convention People's Party, committed to immediate self-government.

From January 1950 Nkrumah organizes a campaign of nonviolent protests and strikes, which lands him back in gaol. But in the colony's first general election, in February 1951, the CPP wins convincingly even in the absence of its leader. Nkrumah is released from prison to join the government. In 1952 he becomes prime minister.

During the years of preparation for independence the neighbouring British Togo votes, in a 1956 plebiscite, to merge with the Gold Coast. It is therefore a slightly extended territory which becomes independent in 1957 under Nkrumah's leadership. A new name of great resonance in African history is adopted - Ghana (although the ancient kingdom of that name was far to the north, in present-day Mali).

Nkrumah, well aware of his status at the head of the first west African nation to emerge from colonialism, dreams of leading the continent into a Marxist future. This requires a republic, which Ghana becomes in 1960 with Nkrumah as president for life. It also needs only one political party, the CPP. However Nkrumah's authoritarian rule, combined with a collapse in the nation's economy, prompts a coup when the president is away in China in 1966 (he goes into exile in Guinea).

It is the first of several such coups in Ghana's short history, but the nation remains true to the hope of democracy. In four decades Ghana establishes as many new republics.

A general election launching the second republic, in 1969, brings to power Kofi Busia, a university professor with a long track record in Ghanaian politics as an opponent of Nkrumah. But he
is unable to improve Ghana's economic performance (weakened by low cocoa prices), and he is removed by military officers in 1972.

For a few years from 1972 a military regime rules with repressive brutality, under the successive leadership of two generals, Ignatius Acheampong and Frederick Akuffo. But by 1979 a group of younger officers has had enough. Led by Jerry Rawlings, a flight lieutenant in the air force, they take power. Acheampong and Akuffo are executed. Arrangements are put in place for speedy elections.

The third republic, in 1979, lasts only two years before Rawlings and his fellow officers intervene again. After his second coup Rawlings takes personal power, ruling through a Provisional National Defence Council which has the specific brief to organize a renewal of the nation's political and economic life down to village level.

Rawlings proves an efficient leader, winning international support for his economic policies, and the 1990s demonstrate that he has popular approval as well. In the prevailing fashion for multiparty democracy, Ghana holds elections in 1992 in preparation for its fourth republic.

Rawlings transforms his ruling council into a political party, the National Democratic Congress. The NDC wins nearly all the seats in parliament and Rawlings is elected president. But only 29% of the electorate vote, and most of the opposition parties boycott the election. The 1992 result can hardly be taken as a popular mandate.

However elections in 1996, at the end of the four-year term, are altogether more significant. There are other presidential candidates, at least one of them enjoying wide support. Yet Rawlings astonishes observers by winning 57% of the vote, to his nearest rival's 40%. And the NDC retains its absolute majority in parliament.

After two terms as an elected president, Rawlings stands down for the presidential election of December 2000. It is won by the opposition leader, John Kufuor.