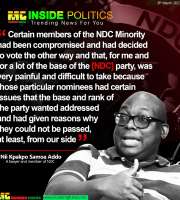 The Constitution of Ghana allows for a legislature; parliament, political parties and the local governemnt - the District Assembly, which sees to the enactment of laws and policies for the development and wellbeing of the nation.