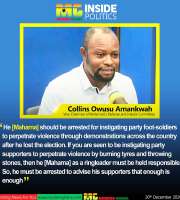 History of the Fante

The Cronology of Leaders

Chairman of the Council and Chief Secretary

Chairman of the Government

History of the Fante

The Fante live around Cape Coast and Elmina and are one of the Akan peoples. The Fanei speak a Twi language, which is part of the Kwa group, and number about 1,170,000. Inheritance and succession to public office are determined mostly by matrilineal descent. According to their oral traditions, the Fanti arrived in their present habitat from the north by the 17th cent. They served as middlemen in the commerce between the interior and British and Dutch traders on the coast. In the early 18th cent. the Fanti formed a confederation, primarily as a means of protection against Ashanti incursions from the interior. Several Fanti-Ashanti wars followed. The Fanti were aided by the British, who, however, destroyed the strong Fanti confederation established between 1868 and 1872, believing it a threat to their hegemony on the coast. In 1874 a joint Fanti-British army defeated the Ashanti, and in the same year the Fanti became part of the British Gold Coast colony.

The word `Asafo' is derived from 'sa' (meaning war) and 'fo' (meaning people). Warrior groups are active throughout the Akan area, but it is the Fante tribe which inhabit the coastal region of Ghana, that has developed a sophisticated and expressive community with a social and political organization based on martial principles, and elaborate traditions of visual art.

It is certain that the local organization of warriors into units of fighting men was an established practice well before the arrival of Europeans. Nevertheless, the influence on - and the manipulation of - these groups to suit the trading and colonial ambitions of the foreigners has created many of the qualities of the Fante Asafo that continue to this day.

The situation throughout the Fante region is fraught with political complexities, for there are twenty-four traditional states along an eighty- mile stretch of the Atlantic coast, and each state is independently ruled by a paramount chief or 'omanhen', supported by elders and a hierarchy of divisional, town and village chiefs. In any one state there may be from two to fourteen Asafo companies, with as many as seven active companies in a single town. There is a lack of political unity within the Fante culture as a whole, so that inter-company rivalries - as well as disagreements between the states - are, not surprisingly, endemic. When the Fante were not fighting together against a common enemy, these antagonisms often extended to open conflict among themselves. observers report that battles between Asafo companies in the eighteenth and nineteenth centuries left many dead and wounded.

By exploiting these divisions, the Europeans could `divide and rule' and ensure that their control of the coast went unchallenged. At the same time, by organizing the Asafo warriors into efficient military units, they could bring together an army for a quick reaction to any threat from the interior. The enemy was, more often than not, the powerful Ashanti kingdom, a traditional opponent of the Fante, and a dangerous and unpredictable supplier of gold and slaves to the European traders on the coast. The primary function of the Asafo, as we have seen, was defence of the state, Nevertheless, the companies are key players in a balance-of- power struggle - typical of the many that exist in communities the world over - between the military and civilian groups within government. Although the Asafo are subordinate to their chiefs and paramount chief, they are intimately involved in the selection of the chief and are responsible for his crowning or 'enstoolment'. As long as the chief has the support of the people - as represented by the Asafo - he has the authority accorded to him by tradition; the prerogative to appoint and remove chiefs remains with the people. Asafo elders also serve as advisers to the chief.

While Fante chieftaincy is aristocratic and matrilineal - the chief tracing his descent through females back to the founders of the community - the Asafo are patrilineal and democratic, Every child, male or female, automatically enters his father's company, and membership is open to all classes, from stool holders to fishermen.

The Use of Flags in the Asafos

The installation of a new Asafo captain is the principal motivation for the creation of a flag. It is the responsibility of the incumbent to commission and pay for the ensign, which then becomes the collective property of his company. The choice of design is his, albeit partly limited to mimicking the examples established by precedent to be the artistic property of the company. The personalizing of flags in memory of the commissioning officer is now a common occurrence.

The display of Asafo flags is associated with the social activities of the company and the town as a whole. For the town the major event of the year is the Akwambo (path-clearing) festival. This is a time of unity, of renewing allegiances and friendships and of the homecoming of family members especially for the celebrations. Paths are cleared to shrines of the gods, often by the river, and as this is a large-scale event it is the time of the presentation of new Asafo leaders, such as supi or asafohen. Bearing their flags, the Asafo companies parade through the streets, to the river, to the town shrines and past the houses of the chiefs to demonstrate their allegiances.

At these festivals the companies of a town proudly and aggressively defend the right to parade specific and exclusive colours, cloth patterns, emblems and motifs on their art forms. The violation by mimickry of a company's artistic property, established by precedent and since 1859 by local law, is seen as an act of open aggression. The flags are also shown at other Asafo events, including the funeral of a company member and the commissioning of a new or remodelled shrine, or on an important anniversary of its original construction. Town, regional and national events, such as the enstoolment of chiefs, the annual Yam Festival and state holidays, are all celebrated with a show of Asafo flags.

At these social events the flags are displayed in a variety of ways. The flagpoles of the posubans, the shrines of each company, proudly carry the flags aloft and the houses of Asafo members adjacent to the shrine, as well as the shrine itself, are decked with strings of colourful colonial and Ghanaian ensigns, Flags are carried in processions and, most dynamically, there is a spectacular display of elaborate dancing with the flag by specially trained Asafo officers, the 'frankakitsanyi'."

In 1853, Cruickshank noted that each company has a distinctive flag; for a company member, 'the honour of his flag is the first consideration'. He also comments that some flags are specifically designed as challenges or insults to rival companies.

These visual insults and provocations often resulted in fatal inter- company clashes. An image of one company catching their enemies in a dragnet brandished by one company at a festival in July 1991 nearly caused a riot! Earlier incidents such as these led to the strict control of flag imagery. At Cape Coast, beginning in the 1860s, all companies were ordered to submit their flags to the Colonial Governor for his approval and to register the approved designs and colours with his secretary. The display of unregistered flags was punishable by law. Even today a new flag must be approved by the paramount chief, the general of the combined companies. and the Asafo elders, then paraded before all the other companies in the area to make sure that no one is offended.

A man holding up the world is a company boast of unlimited power and strength.

'No one can defeat us except God.'

The lion and the leopard are depicted as playing draughts. The draughtboard was used as a visual metaphor to challenge rival companies.

'We control the cock and the clock-bird.' (We control time and decide when things are to be done - both birds announce the dawn with their cries.)

'The crab is feared for its claws.' (The crab is seen as a fearless warrior.)

'If you kill a thousand, a thousand will come.' This image depicts a man being bombarded with porcupine quills. The porcupine was a symbol for invincibility.

There are two possible interpretations to this flag: one salutes the bravery of the Asafo company, the other derides the foolishness of the company's rival. In the first instance, the owners of the flag identify with the human figures, in the second with the leopard.

Early flags showed no borders at all and fringes were not present. This is a more modern flag, which includes a striking border and a fringe.

The company captures its enemies.

The company enslaves its enemies.

The original Asafo shrine was a tree with a cane fence around it and a medicine mound. The female guardian spirit of this sacred tree was depicted in several flags.

'If you shoot at a leopard and do not kill it, it is better not to have shot at all.'

'When the cat is dead, the mice rejoice' or 'The mice are even afraid of a dead cat.'

'Like the (Brebia) vine, we can conquer any problem.'

The company mocks its rivals as mere vultures.

'The monkey leaps only as far as it can reach.'

'You say you are a man, but I have weighed your load and you are weak.'