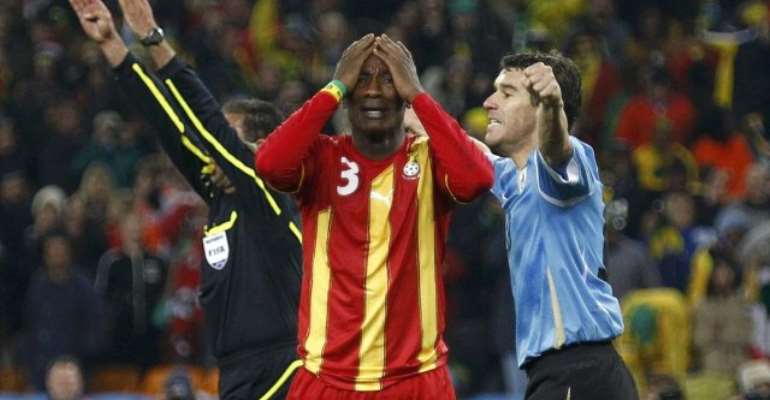 Ghana striker Asamoah Gyan has revealed he is still haunted by his famous penalty miss against Uruguay during the 2010 Fifa World Cup in South Africa.

In what was the last kick of the game, the frontman, who currently plays club football for Indian fold NorthEast United, struck his injury-time kick against the crossbar, breaking the hearts of millions of Ghanaians and Africans.

Had he converted, he would have sent the Black Stars into the semi-final of the World Cup - the first by any African nation.

"In the 2010 World Cup, we were knocked out in the quarter-final in controversial circumstances," Gyan told Outlookindia.

"It was against Uruguay, and I missed a crucial match-winning penalty towards the end of extra-time, after a Luis Suarez handball.

"The penalty miss is something that I will never forget. It's part of my life now. I am not the only player, who missed a crucial penalty.

"We could have become the first African team to reach the World Cup semi-final. Sometimes when I am alone, I think about it and it still hurts.

"I feel, 'Oh! Maybe we can play the penalty again so that I can redeem myself.' Life goes on, I need to forget about it and live my life."

Ghana have since 2010 not gone close to the quarter-final of the World Cup.

In 2014, the Black Stars suffered a group stage exit while in 2018, they failed to qualify for the tournament altogether.

Gyan, though, has gone on to become Ghana's most-capped and all-time top scorer.