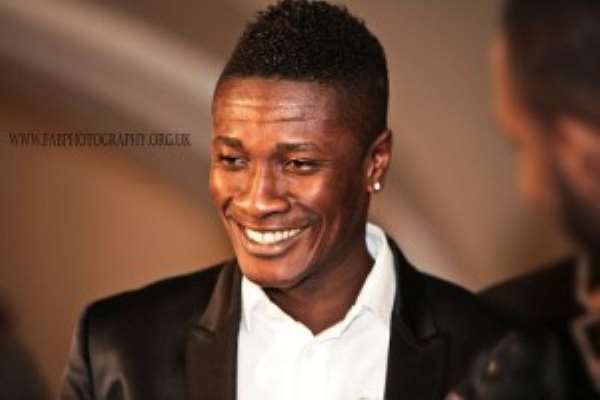 Black Stars captain, Asamoah Gyan says he is grateful to his stars for making him realize his childhood dream of becoming a great footballer.

The former Sunderland record signing attacker who now plies his trade in the Chinese Super League with Shanghai SIPG for the past years has been the most criticized footballer in Ghana following his penalty missed in 2010 World cup against Uruguay.

But the 30-year old striker seemingly won the hearts of Ghanaians during his exploits at this year's Afcon championship held in Equatorial Guinea when he led the Black Stars team to a second place finish after losing the trophy to Ivory Coast on penalties.

After being honoured the Sports Fans Personality of the Year, an even organized by Global Media Alliance last Saturday, Gyan said when he was a child he dreamt of becoming a successful footballer and his dream has come to pass.

'If somebody says he or she is living in his dream, hope everybody understand him. I remember when we were kids a teacher walks in and asked what you want to be in future some were saying Lawyers and President and stuff, the only thing I always said was to be a football star."

"I want to achieve a lot in football. That was why  I said I'm living in my dream so. I'm a happy man right now,' said Gyan.

He continued - 'Whenever my old friends see me, they remember I said it and I have lived by it.  So I'm motivating all the guys who are looking up to me and the other Black Stars players that it is possible they can do it despite everything."

"In my career, I have seen ups and downs and a  lot of criticism and stuffs. But I am here I am today,' Gyan recalled.

Gyan is an icon in Ghana and in the World as he is currently the all-time top scorer for the Black Stars with 49 goals and the highest paid African footballer.