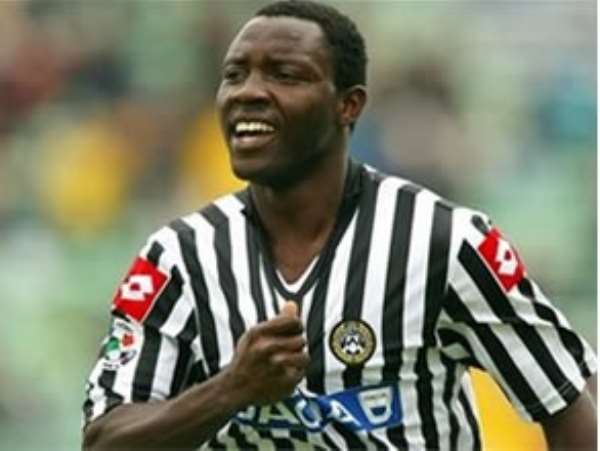 Italy-based midfielder Kwadwo Asamoah has been handed the famous Ghana 'Number 10' jersey for next week's African Cup of Nations in Angola.

The Udinese silky enforcer will be following the in the footsteps of legends Abedi Pele and Stephen Appiah who wore the famous Black Stars shirt.

Asamoah, who is tipped as Ghana's next superstar, will wear the shirt in the absence of Appiah who is out of the tournament because of injury.

Captain Michael Essien will wear his normal 'Number 8' shirt while Sulley Muntari 'Number 11' jersey has been taken over by Moussa Narry.

Asamoah Gyan will maintain his Number 3 with his strike partner Matthew Amoah will be decked out in the 'Number 14' jersey.

The details were revealed in the squad lists for the tournament by the Confederation of African Football on Monday.

But the udinese midfielder's jersey for this tournament has raised eye brows as he seeks to announce his presence on the global stage in this tournament.

The Udinese star is expected to blossom in Angola as he seeks to follow in the footsteps of Stephen Appiah and Sulley Muntari have both starred for Udinese.

Ghana is a known world football factory for midfielders and Chelsea's Michael Essien can currently claim to be one of the world's best enforcers.

Going further back, Karim Abdul Razak was one of Africa's premier midfielders during the 1980s, whereas former Marseille and Torino playmaker Abedi Pele, the 'African Maradona', is an undisputed legend of the game.

In many ways, Asamoah is the complete modern midfielder.

He has explosive pace, everlasting stamina, bull-like strength, and moves tirelessly from box-to-box.

Yet, unlike your Essien or Muntari, he also possesses some exciting technical skills.

Asamoah dribbles and surges past opponents, passes the ball well, has good awareness, and possesses a sweet left foot.

If you had to compare him to a player, you would say he is a mix between Edgar Davids and Manchester United's Anderson, only less robust and defensive-minded than the former, and not as tactical as the latter.