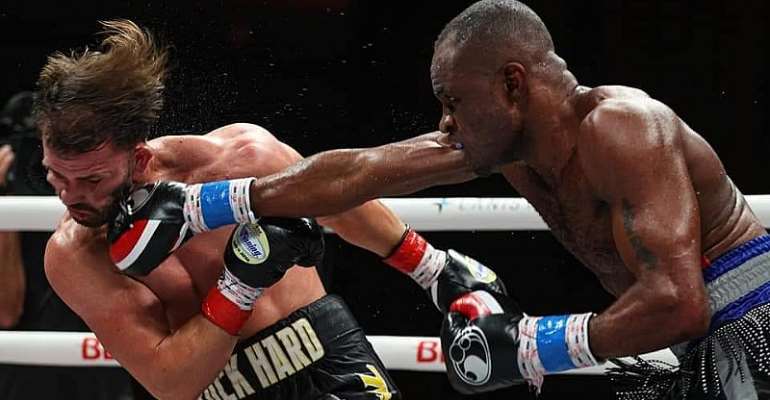 Ghana’s Emmanuel 'The Gameboy' Tagoe on Friday beat American Mason 'Rock Hard Mighty' Menard on points in a 10-round lightweight bout at the Seminole Hard Rock Hotel and Casino in Hollywood, USA,

Before the fight, Tagoe has predicted a knock out at the press conference ahead of the bout, but Menard fought a good fight to avoid the knockdown.

World Ranked Lightweight Emmanuel ‘Gameboy’ Tagoe now has a record of 32 wins against one loss and 16 KOs, while Mason Menard of Rayne, Louisiana drops to 36 wins 5 defeats and 25 KOs.

“Emmanuel is in the best shape of his life,” said Peter Kahn.

Tagoe is trained by the renowned Javiel Centeno, proprietor of the Sweatbox Gym in Davie, FL. “After having to go back home to Ghana when his flight was cancelled back in March due to COVID-19, I was concerned that when he was able to get back into camp he would be out of shape. I was wrong. He showed up in shape and we hit the ground running without skipping a beat. Camp has gone extremely well and the entire Sweatbox team of boxers are looking forward to seeing him display his exciting, fan-friendly boxing style live on DAZN.”

The ten-round clash was a featured bout on the undercard of the Super-Middleweight grudge match between Daniel Jacobs and Gabriel Rosado presented by Matchroom Boxing.

Why are you refusing to obey the orders of the Court ? — Jus...
9 minutes ago