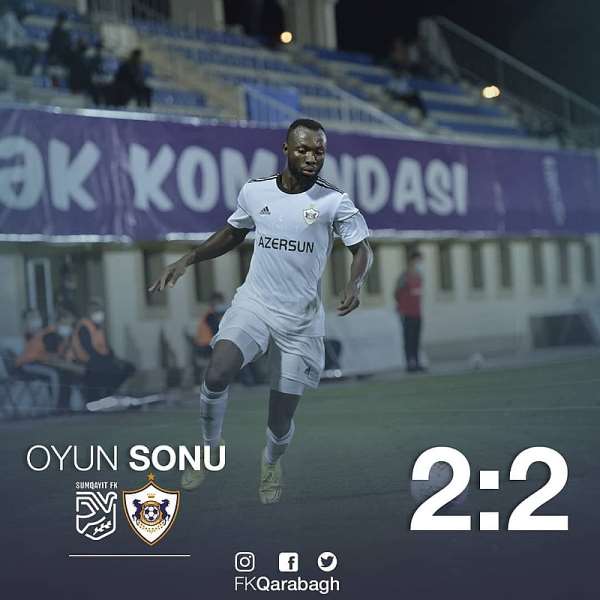 Ghanaian forward, Kwabena Owusu scored for Qarabağ FK on Friday to help the team earn a 2-2 draw against Sumqayıt FK at the Kapital Bank Arena in the Azerbaijani Premier League.

The former Córdoba marksman joined the Azerbaijani outfit earlier this year and has gradually established himself as a key man for the team.

Earlier today, he was handed a starting role for Qarabağ FK when the team locked horns with Sumqayıt FK on Matchday 4 of the ongoing 2020/2021 Azerbaijani Premier League season.

The two teams appeared evenly matched in the first half and went into the break with no goals.

Following a good start to the second half, Ali Ghorbani found the back of the net on the 52nd minute to shoot Sumqayıt FK into the lead.

Two minutes later, the home team doubled their lead with a strike from Dzhamaldin Khodzhaniyazov that found the back of the Qarabağ FK net.

Heading towards defeat, a Kwabena Owusu equalizer right before the hour mark started a comeback for the visitors.

Fortunately, their efforts in the last 30 minutes of the game paid off in added time as Filip Ozobić netted a crucial second goal to ensure Qarabağ FK drew 2-2 on the road.

This season, Kwabena Owusu has featured in all 4 league matches of his team and already has 2 goals to his name.